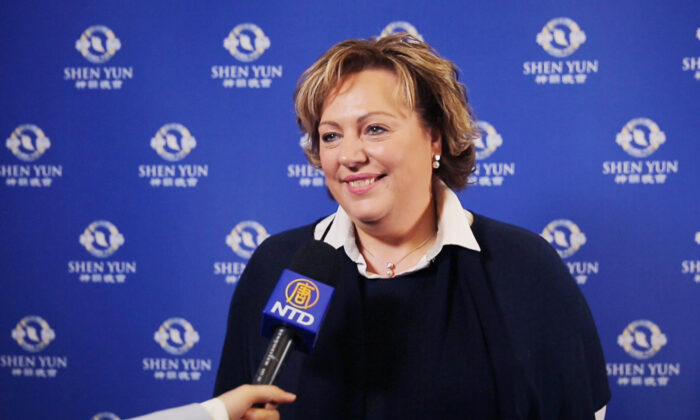 BIRMINGHAM, England—Esther O’Reilly-Cain and her daughter were left inspired by the beauty of Shen Yun that unfolded before their very eyes on Birmingham’s International Convention Centre’s stage, on Jan. 2, 2020.

“Incredible, absolutely amazing. I wasn’t expecting it to be quite so colorful and spectacular—and it really is fabulous, really really worth going to see,” said O’Reilly-Cain.

As New York-based Shen Yun made its first stop in the UK on its world tour, this mother and daughter were fortunate enough to get tickets to one of its four sold-out performances in Birmingham.

Esther O’Reilly-Cain is a company managing director, and her young daughter does Irish Dancing. O’Reilly-Cain felt Shen Yun displayed many positive lessons for her little dancer.

“Because she dances, it’s wonderful to see the level of dancing and the commitment that dancing at a very high level is all about,” said O’Reilly-Cain.

Shen Yun’s website states that classical Chinese dance, the heart of a Shen Yun performance, has helped to preserve 5,000 years of Chinese culture.

O’Reilly-Cain went on to say how it was beautiful for her and her daughter to experience and understand a different culture, its music, and learn its lessons.

The pair especially loved the female dancers’ costumes of traditional Chinese attire throughout the dynasties, and how they incorporated it into their dances. Such as the traditional Chinese high-heeled shoes from the Manchurian court during the Qing Dynasty, and the long, silky “water sleeves” dancers could throw and catch with seemingly effortless grace. O’Reilly-Cain expressed she had never seen anything like it before.

“We particularly loved their water sleeves that they wore, that was absolutely incredible! … The colors, the energy, just everything is incredible.” O’Reilly-Cain said.

O’Reilly-Cain was taken into deep thought by the stories performed in Shen Yun, and the way the dancers interpreted and portrayed them.

“It just makes you think about, I suppose, your own self and how that translates into today, and I just think it is inspiring.”

She went on to describe how when watching Shen Yun, you are able to relate to the stories from historic tales to stories from modern-day China.

“It’s all still very relevant, the journey that you go on is very similar, a lot changes around [you], but the actual meanings and what you believe and your beliefs are very very much the same and the values should be the same. It’s all relevant for today,” said O’Reilly-Cain.

A Story That Gives Hope and Light

O’Reilly-Cain referenced a dance piece in Shen Yun that depicted the persecution of Falun Gong (an ancient Chinese meditation practice that follows the principles of truthfulness, compassion, and forbearance). The practice has been persecuted by the Chinese Communist Party since 1999, and the persecution still continues to this day.

When referring to the story of hope and faith in the face of persecution, she said that when there are desperate situations, that’s when people turn to a faith, Buddha, or God.

“Having a faith system sees an awful lot of people through, and in an uncertain world it’s lovely to see that [depicted in the dance piece]—that gives hope and light, absolutely. It’s lovely,” said O’Reilly-Cain.

O’Reilly-Cain was moved by the lyrics from one of Shen Yun’s songs, sung in traditional bel canto style.

Shen Yun’s website states: “The resounding voices of bel canto soloists are an integral part of the Shen Yun experience. Each program is heightened by several moving selections from our singers. Their impassioned songs give voice to hopes that have shaped Chinese culture for centuries.”

O’Reilly-Cain said, “When the lady was singing, and the words that were in the song were very, very thought-provoking—about strength and weakness, dark and light.”

She described the thoughts that came to her mind while listening to the soprano’s words:

“Kindness, being kind, living your life in that way, it’s right—it’s how it should be.”

Shen Yun’s Costumes Take It to ‘A Whole Different Level’

Shen Yun’s website states that their dance costumes and colors are true to traditional aesthetics and styles.

“Legend has it that ancient Chinese clothing was inspired by the attire worn in the heavens. Shen Yun’s costumes bring back the styles of China’s different dynasties, regions, and ethnic groups,” Shen Yun’s website states.

O’Reilly-Cain was left in awe by the colorful, ancient attire worn by the Shen Yun dancers.

“My daughter does Irish dancing and we wear very colorful costumes in Irish dancing, but this [Shen Yun’s costumes] is inspiring! It’s a whole different level of just bright and colorful … Everything is just wonderful,” said O’Reilly-Cain.

When asked how she would introduce Shen Yun to her family and friends who haven’t seen the show, O’Reilly-Cain responded:

“You have to go. You can’t explain it, you just have to do it! So just go, it’s incredible.”