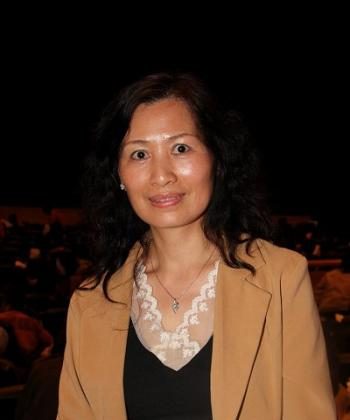 Restaurant Owner Says, ‘I am so lucky to see the Shen Yun performance’

HSINCHU, Taiwan—A garden restaurant, famous for its unique cuisine and elegant atmosphere, attracts many entrepreneurs and employees of high-tech industries in the Hsinchu Science-Based Industrial Park. The restaurant’s owner, Ms. Liang, rushed to the Performing Arts Center of Hsinchu City on the evening of March 22 to watch the Shen Yun Performing Arts last performance in the city. Moved by the performance, Ms. Liang said, “I am so lucky to see the Shen Yun performance tonight. I like it very much.”

Ms. Liang described how she was almost late for the show. She said, “Thanks for God’s arrangement.” She was so busy that she forgot about the show. Apparently by chance, a slip of a note she wrote caught her eye and reminded her about the event. It was very close to the start of the show. With the thought “I shall hurry up and go to the Shen Yun performance," she set off immediately. Upon arriving at the Performing Arts Center, she had trouble at first finding a parking place. But before long, she found a parking place and barely made it to the show.

Deeply touched by the Shen Yun performance, Ms. Liang said, “I feel my soul was thoroughly cleansed!” She was moved to tears several times during the show. She said, “Really, human life is very short. Instead of pursuing power and influence, we should make good use of our life to bring more harmony to society.”

Ms. Liang also calls on entrepreneurs in the Hsinchu Science-Based Industrial Park to see the Shen Yun show, especially during this time of economic difficulty. She said the entrepreneurs are very busy, and watching Shen Yun can bring tranquility to their spirits and calm them.

Her restaurant is a very famous one on a mountainside in southeastern Hsinchu. It is called a garden restaurant because it incorporates spacious meadows and tall trees.