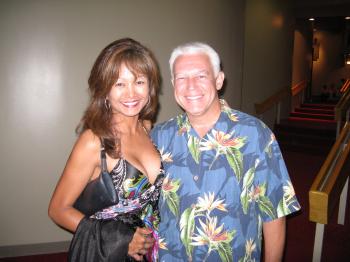 Mr. and Mrs. Kline in the foyer, after having enjoyed the show (The Epoch Times)
Arts & Culture

Retired U.S. Navy Captain: ‘I see the great wisdom in the culture’

By Lu Rusong
Print
HONOLULU—The largest city on the archipelago of Hawaii experienced 5,000 years of Chinese culture through the Shen Yun Performing Arts 2009 World Tour, which played at the Blaisdell Concert Hall for three shows on March 30 and 31.

Mr. Cajskyeti, a retired U.S. Navy captain of Polish decent, who has lived in Hawaii most of his life, was in the audience for the final curtain call of Shen Yun in Honolulu. Mr. Cajskyeti served at Pearl Harbor, and then went to the South China Sea and other places.

“I am enjoying it very much,” he said.

“There are certain types of things about the Chinese culture that I haven't seen before. I have been to Hong Kong and the new territories, but not elsewhere in China. I happen to have married a Chinese from Tahiti. We have been married for 42 years, and I certainly … would like to find out [more] about Chinese culture, which I admire very much.

“I see the great wisdom in the culture and have read translations of a number of the words, and I appreciate the deep thought and similarities between the Chinese part and the Western classical part. I am enjoying this music very much and the spirituality part that has been brought out.

“Well, the deep spiritual background of these dances and the … passion that was presented, I hadn't expected that. I thought it would be more superficial, but I see the depth to it that I hadn't anticipated.”

Mr. Cajskyeti was particularly impressed with the precision of the dancing and the drumming.

“I was struck with the uniformity of the dancing … the choreography and the precision of all the performers.

“I was stuck by the precision drumming, the exact rhythms that were maintained, the people were right on beat to a fraction of a milli-second, I think.”

Mr. and Mrs. Kline were also among the audience and were very impressed by the Shen Yun performance.

Mrs. Kline, a bank branch manager, found the "singing to us [to be] the most impressive," with the soprano standing out the most for her.

Her husband, who owns his own air-conditioning company, found the musical instruments to stand out in the performance, particularly the traditional two-stringed Chinese instrument, the erhu, with its otherworldly quality that stirs the soul as few instruments can.

Mrs. Kline found that what is "making it [Shen Yun] interesting is that the dancing is telling the story." Chinese classical dance contains a great amount of movement and depth in order to connote deeper feelings in the performance.

She found the piece Mulan Joins the Battle to be the most interesting, and the costumes to be "very, very nice."

This is the second of three Shen Yun Performing Arts show in Honolulu before it continues on its 2009 World Tour to Vancouver on April 3.