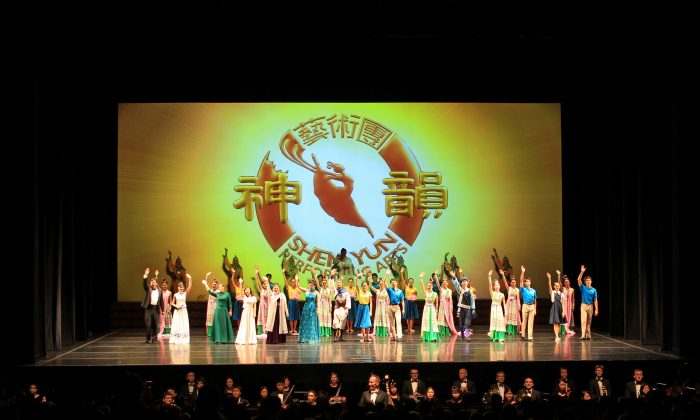 Mr. and Mrs. Besen well known philanthropists are founders of the Sussan retail chain. The Besen’s are also among the nation’s most influential and generous art benefactors offering financial grants and professional support to the arts and culture. They have long been passionate art collectors and operate Australia’s first privately funded public art gallery, Tarrawarra, at their Yarra Valley winery.

Mr. Besen was particularly moved by the experience.

“I loved the show very much. The movements are excellent and the colours are very good and they all seem to fit very well. Good stories.”

All the stories and legends have been passed down through generations and reflect all levels of Chinese society. They also bring out faith in the divine and the mandate of heaven, reflecting the essence of traditional Chinese culture.

Shen Yun is known for its breathtaking digitally animated backdrop and colourful costumes, both of which bring vivid colours to the stage.

Referring to the orchestra which combines Eastern and Western music Mr. Besen thought they were beautifully balanced.

At the heart of the performance is classical Chinese dance, one of the most comprehensive dance systems in the world. Chinese classical dance includes combinations of leaps, turns, flips, spins, and other aerial and tumbling techniques.

“I love it, I think it’s beautiful. It’s entirely different to the classic ballet, the European classic ballet. I think the style of its own and it’s very well done and very colourful and very full of excitement.”

Mr. Besen said he would highly recommend it to his friends, “I think it’s a wonderful show and certainly worthwhile seeing, but you’ve sold out anyhow. Very good, yeah very good,” he added.

‘I’m just enjoying it so much, I’m going to cry’

Mari Lindsaar, now enjoying retirement, has been in the wine industry for 40 years and was previously a gem dealer in Hong Kong and has a keen interest in Chinese culture.

She was overwhelmed with the whole experience.

Ms. Lindsaar was quite emotional as she could really connect with the Chinese history and had great empathy for the persecution that is happening in China.

“It’s just so beautiful to look at and I have a reasonable understanding of Chinese history because  I lived there … I think they’re actually quite courageous putting some of these themes on to the stage. I understand that they’re not based in China…”

She was referring to the piece, The Power Of Compassion where the performers enacted the persecution of the spiritual practice Falun Gong. Over the past 60 years the communist regime has attempted to systematically destroy the traditional Chinese culture.

Ms. Lindsaar really appreciated the combination of the Eastern and Western orchestra.

“The music is of course traditional Chinese which I like, but I also like the Western influence,” which she could hear coming through in some of the pieces.

The word that came to mind for Ms. Lindsaar to describe the performance was passion.

She said she was going to tell her Chinese neighbours to bring the whole family to see Shen Yun so they could experience the true Chinese culture rather than what they experience today.

“I’ve just enjoyed it so much. They’ve got to bring the entire family, who are here from China at the moment, they’ve got to all come and see it. I hope they do.”