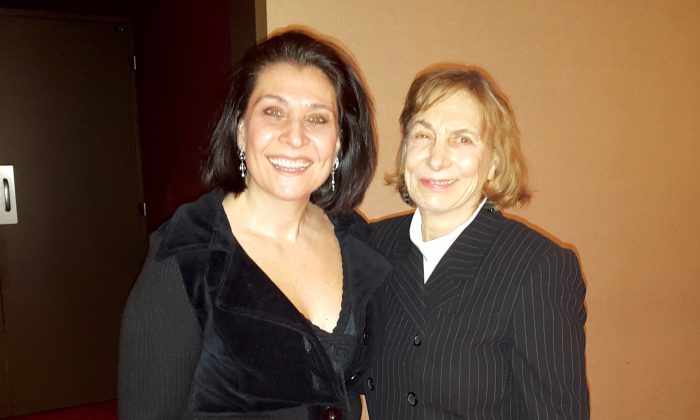 NEW YORK—Shen Yun Performing Arts is the missing piece in your life, according to Yvonne Hendricks, an exercise nutritionist and TV personality known for promoting the health and wellness industry.

“It speaks to your soul. It’s something that I think we as humans are really lacking, and this is a show that I think speaks to the spirit,” said Ms. Hendricks at Lincoln Center on March 6. She attended the performance with her friend Heda Silverstein, a retired teacher, who wanted to see Shen Yun for her birthday.

The two friends were enthusiastic, the first to give a standing ovation as the performance concluded.

It was just incredible. It took my breath away, I was in tears.
— Heda Silverstein

“It was just incredible. It took my breath away, I was in tears,” said Ms. Silverstein, who wanted to stand and applaud for the performers throughout, and would have if she wouldn’t have gotten in the way of other audience members. Instead, she yelled “bravo!”

“The choreography! the costuming! the music! I mean the music is all original,” Ms. Silverstein said, noting she’d gone through the program to learn who the six choreographers were, and wanted to purchase a recording of the performance.

“They brought the whole culture from the past to what’s going on in China now,” Ms. Silverstein said. She had traveled across the world and recalled her trip to China in the 1980s. The Cultural Revolution had passed, but the people were terrified at the prospect of having everything taken away again, she said.

So to see New York-based Shen Yun revive the traditional Chinese culture and bring it to the world’s stage, and through a combination of the best of the performing arts, Ms. Silverstein felt it was incredible.

“It’s imperative!” she said with urgency, adding how surprised she was to find out how young the company is—formed only 10 years ago.

Ms. Hendricks, too, had traveled all over the world in her career, with years of experience in news, photography, fashion, and business media.

Usually when Ms. Hendricks is introduced to a performance, there is a top-billed artist who carries the performance, or one or two people who really shine on stage. She didn’t know any of the artists coming into Shen Yun. But on a purely art appreciation level, she was just astonished.

“Every single person in that show deserved a standing ovation,” she said. The athleticism and skill of the dancers, she said, was just superb.

There was something relaxing about it, yet stimulating at the same time, she said. It was a marvel that Shen Yun had used modern technology to so seamlessly integrate with the ancient form of classical Chinese dance; how the dancers worked with the animated backdrop, and how it helped present a divine culture.

The most moving piece of art that I’ve seen, ever.
— Yvonne Hendricks

“The most moving piece of art that I’ve seen, ever,” she said.

When Shen Yun spoke to Ms. Hendricks’s soul, she felt “it said to continue to be as kind as you can, to appreciate the beauty in yourself and in others.”

Being so well traveled and living in New York, Ms. Hendricks is interested and appreciative of learning about different cultures. The world today is becoming more blended, and while that is important, retaining culture is important as well, she explained.

“In today’s world, it’s missing,” she said, and  Shen Yun showed the “value of restoration.”

“It’s a value of, yes, technology is here, but it doesn’t have to rule us. We are very much human and [we can] allow our human strength and personification to come forth, through the form of art, through the form of music, through the form of singing. Let the five senses come forward. Because you can even taste the food; after seeing this you want to then taste everything authentic about the whole experience. That’s what it did for me,” she said.

“It was magnificent, I can’t tell you enough about it,” Ms. Hendricks said.