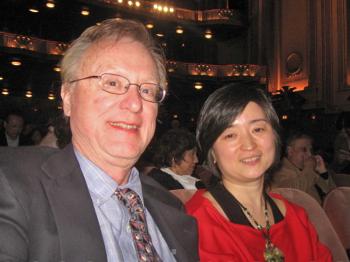 They learned about the performance from the Tribune. Mr. Carpenter described the dancing as very impressive, very graceful and very beautiful. "The costumes, the movements of the dancers, and the music is interesting."

Mr. Carpenter found the modern historical element interesting as well. "The dramatization of Falun Dafa is interesting." In Our Story a school teacher and her beloved students are victims of the persecution, as are hundreds of thousands in China today.

Falun Dafa practitioners live by the tenets of truthfulness, compassion and tolerance and have undergone a massive campaign against them from the Chinese regime since 1999.

He concluded with the thought: "People who like ballet in the U.S. or any kind of dance will find [Shen Yun] interesting."

Mr. Rayburn, a retired business professor at the University of Tennessee, found the costumes fabulous, the dances very good, and the stage layout very good.

He was also impressed with the emcees, one in English and one in Chinese, that came onto the stage to talk before each of the acts so that the audience had an understanding of what is transpiring.