Shen Yun Has a Beautiful Message

Not one seat spare at Shen Yun 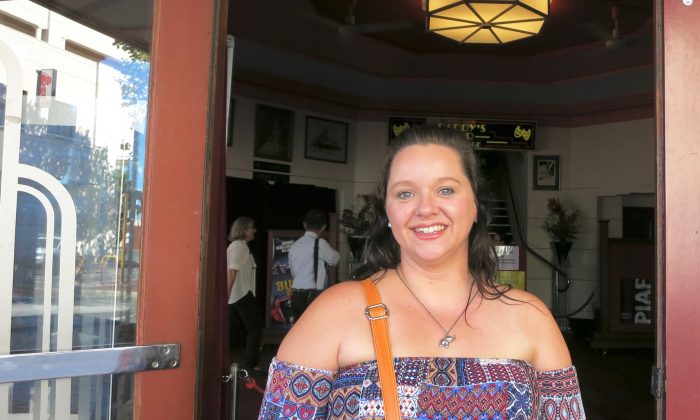 PERTH, Australia—As Perth was entering another record-breaking heatwave, Perthians flocked to the Regal theatre for one of their last opportunities this season to see the splendour of Shen Yun Performing Arts on Feb. 6.

Not a spare seat to be found, Perthians found solace from the heatwave and were transported to another world through the beauty and tranquillity of Shen Yun.

Deborah Meerton, a self-employed whole food nutritional advisor who previously worked for EQ Events, Intework and Cairns One, has values such as honesty, hard work and dedication in her personal and professional life. She strives to make the most of her creative abilities with full integrity and zest to enhance her skills.

She was very pleased to be in the audience and to experience the wonder of Shen Yun. She said it was graceful and elegant.

“It was beautiful and powerful. The costumes were gorgeous. It had a beautiful message and it was very entertaining,” she said. “I loved the drums and I loved the fans, the bright colours and the elegant, relaxing music.”

Based in New York, Shen Yun brings to the world five millennia of Chinese culture and history through music and dance.

Ms. Meerton found the music “very soothing and entrancing.” She said, “It was beautiful, it was just easy listening, exciting, and went really, really well with the show.”

The soloist performances also touched her heart. She said the soprano‘s voice was powerful and the words had a message for humanity. “It was emotional and powerful,” she said. “The music and the combination of the message that was being shared.”

The website states, “Principles such as benevolence and justice, propriety and wisdom, respect for the heavens, and divine retribution, all come to life, washing over the audience.”

These values resonated with Ms. Meerton. “I felt it was a really beautiful way of communicating about the history lesson, about what it’s actually like in China to express yourself,” she said. “It was really informative.”

One dance story depicted the persecution of Falun Dafa, a peaceful meditation practice, in present day China. Ms. Meerton was touched by this dance and felt it was a pity people in China today have no freedom of belief or freedom of speech.

“I really enjoyed the one before the interval where they were being persecuted for meditation and the whole challenge of freedom of speech that we take for granted in the Western world,” she said. “It was gratitude, that I live in a place where I can express my beliefs without persecution.”