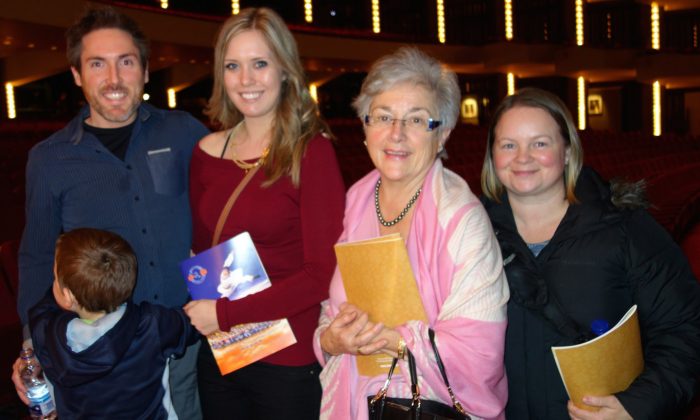 Inkeeper Robert Prior with his son, wife, mother, and sister at Shen Yun Performing Arts on the afternoon on January 4, 2015 at the National Arts Centre. (Grace Dai/Epoch Times)
Arts & Culture

OTTAWA, Canada—Innkeeper Robert Prior brought his family to see Shen Yun Performing Arts at the National Arts Centre on Sunday afternoon Jan. 4 and, seating close to the stage, they had a particularly good view of the orchestra and the dances.

Thus, Mr. Prior, owner of the Almonte Riverside Inn & Kitchen, was particularly taken in by the music of Shen Yun. The company’s unique orchestra combines Eastern and Western instruments in a harmonious sound that brings out the best of the two traditions.

It was his first time experiencing this dance form, and Mr. Prior was particularly fascinated by the men’s group dances. “That was intriguing to see … how they would put together a show like this,” he said.

Established in 2006, Shen Yun aims to revive the divinely inspired Chinese culture that was almost lost under today’s communist regime.

Mr. Prior was surprised that this performance could not be put on in the China due to the strict censorship existing there today. The two emcees discussed this unfortunate reality along with providing explanations of Chinese dance.

“Our theatre here is very different in terms of [being] open and willing to showcase more different opinions,” he said. “So seeing that something like this would not be put on in China is a learning experience for me.”

Another couple that came to see Shen Yun that afternoon were husband and wife team Raymond Gervais and Dianne Cyr, who own a trucking company together.

“It’s extraordinary. The costumes are amazing. The dance is amazing. The jumps, the flips, the women are so graceful. It’s absolutely amazing. I love it!” said Ms. Cyr.

“It’s all the grace, it’s all the beauty, the colours, and the tenderness, the energy of the music,” added Mr. Gervais.

“Everything is just perfect!” said his wife.

It was the couple’s first time watching a Chinese cultural performance, and they were very impressed.

“It seems that it’s about the spirit of the Chinese,” he said.

Shen Yun presents 5,000 years of civilization and it also touched on the situation today with the spiritual meditative practice of Falun Gong and how it is persecuted in China.

Ms. Cyr referred to the piece “The Power of Compassion” and expressed her regret that the practice is banned in China.

“I’ve learned a lot with the ‘compassion dance.’ I had no idea that most of this was banned in China, like I mean it’s beautiful. Why would they want to ban something like this?”

Mr. Gervais noted that this culture, although thousands of years old, is relevant to our society.

“We still need it today—the tradition, the spirituality of everything,” he said.

With reporting by Grace Dai and Madalina Hubert