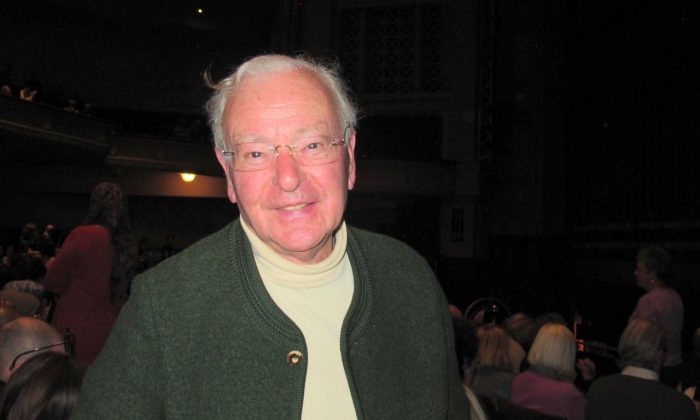 EDINBURGH, United Kingdom—Dancers glide across the stage in perfect sync with a live orchestra that blends music from the East and West.

“The quality of the dancing, the energy and the synchronizing—absolutely marvelous,” said Tom Burr MBE, who watched Shen Yun at the Edinburgh Playhouse on Jan. 25.

Burr a former National Trust manager, was awarded an MBE for services to conservation in the Millennium Honors List.

Shen Yun Performing Arts was formed in 2006 by a group of artists with a shared mission to revive 5,000 years of authentic Chinese civilization, which was almost lost in China in recent years under communist rule.

The company tells stories from ancient China to the modern day through classical Chinese dance and music. Featuring ethnic costumes, a live orchestra, and a digital backdrop, Shen Yun has touched millions across the globe.

“I thought there were some wonderful ideas, the spiritual aspect of it,” he said.

According to the show’s program book, Shen Yun performers are reviving authentic Chinese traditions and draw inspiration from the spiritual practice of Falun Dafa.

“They meditate together, study teachings together, and strive to live by truth, compassion, and tolerance,” the program book says.

The art form of classical Chinese dance can express values passed down from ancient China. It is one of the most expressive art forms in the world.

Burr said it was all he expected and more.

He said the performance was “astonishing.”

With reporting by Mary Man and Jane Gray