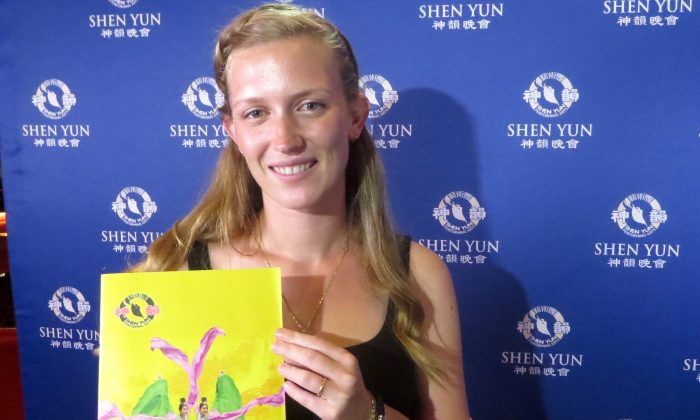 MELBOURNE, Australia—Shen Yun Performing Arts World Company has toured the world to acclaim and the classical Chinese dance and music company’s performance at the Melbourne Arts Centre State Theatre Feb. 22 was no exception.

Shen Yun was “amazing, incredible and inspirational,” said folklorist dancer, Jovana Hasura, who was among the audience that night.

Ms. Hasura has a musical background and appreciated the many attributes of the New York based company.

“It was fantastic, I love the colour and I love the different stories about the culture.”

One such dance, “Drums of the Grasslands,” is reminiscent of the Mongolian prairies, evoking images of flying eagles and wild stallions.

“That for me was an amazing dance,” she said.

“Ninety nine percent of dancers in this world cannot dance like that,” she said.

In response to the entire evening with Shen Yun, Ms. Hasura said, “My heartbeat slowed down, it was very relaxed, and calming.”

‘Divine beings dancing on the stage’

China was once known as the Celestial Empire, its culture having been brought to earth from the heavens. When communism took power in China the regime launched campaigns like the Cultural Revolution to root out the ancient beliefs, and the suppression continues today.

Ms. Gomez said because of China’s oppression “of this kind of cultural expression” she could not help shedding tears.

“It’s so beautiful and magical, and so true,” she said. “It’s part of their culture. It has to be shown and embraced and for their people to be able to express it.”

Ms. Gomez definitely thought there were “divine beings dancing on the stage.”

“You could see it in their dancing, their movements, so full of grace,” Ms. Gomez said.