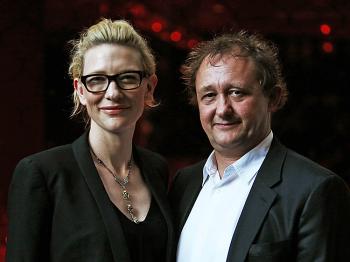 Mr. Upton and Ms. Blanchett, who are both artistic directors of the Sydney Theatre Company, saw Shen Yun with their three sons, Dashiell, Roman and Ignatius.

“It was an extraordinary experience for us and the children,” Ms. Blanchett said. “The level of skill, but also the power of the archetypes and the narratives were startling.”

“And of course it was exquisitely beautiful,” she added.

Cate Blanchett is a five-time Academy Award nominee, winning the Oscar for Best Supporting Actress in 2004 for her performance as Katharine Hepburn in The Aviator. She was also nominated for lead actress for her performances as Queen Elizabeth I in both Elizabeth and Elizabeth: The Golden Age.

Andrew Upton has written adaptations for both the Sydney Theatre Company and London’s Royal National Theatre. He has also written, directed and produced under the couple’s own film production company, Dirty Films.

Shen Yun Performing Arts International Company will perform at Sydney’s Capitol Theatre through to Feb. 23. Next stop on the tour is Melbourne, March 1-6. For more information, visit ShenYunPerformingArts.org.