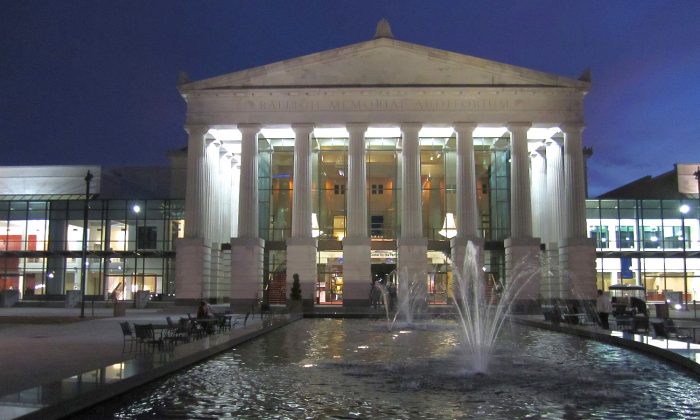 “I think the show is wonderful,” the business owner said. “I have never seen anything like the show, and it has exceeded my expectations.”

The performance was held at the Duke Energy Center for the Performing Arts, Jan. 10.

Mr. Sinsley owns and runs a telecommunications company in Raleigh employing up to 20 people. He lavished praise upon the dance company’s production, which is acclaimed as “a study in grace, wisdom, and the virtues distilled from the five millennia of Chinese civilization.”

The choreography, dancing, and individual movements of each performer impressed Mr. Sinsley the most.

And the vocalists, who use of the bel canto technique to sing Chinese text, caught his attention as well.

“This means that the singer must, while continuing to meet the challenges inherent in bel canto technique, retain proper Chinese pronunciation and diction. Today, these singers’ ability to do this is unparalleled,” the website reads.

“I don’t know the Chinese language, so it’s interesting to hear the Chinese singers. Obviously they are very skilled in what they sing,” Mr. Sinsley said.

With the aid of a digital backdrop behind the performers, a large projector screen showed the Chinese lyrics translated into English subtitles.

“Makes it nice to see the translations to English from Chinese from what they sang. But obviously they are very, very skilled and very beautiful,” he said. “I think they are meaningful lyrics.”

Brimming with philosophical reflection about human life and containing deep layers of meaning, the texts go beyond the boundaries of nation, race, and culture, and have been fondly received and appreciated the world over.

“I mean, it might be spiritual in a Chinese sense, or maybe to Americans. To me, I find it to be more meaningful and poignant. It just is,” he said. “It [adds] good meaning into the lyrics.”

Mr. Sinsley learned some Chinese in college, but not enough to speak very well, he said.

“I come with a small background. For instance, I took Chinese language in college, but then, not enough to get very proficient,” Mr. Sinsley said. “But it’s very interesting to just see the Chinese history, and see it from the dance and theatrical perspective.”

Shen Yun’s history began in 2006 when a group of leading classical Chinese artists came together in New York with one wish: to revive the true, divinely inspired culture of China and share it with the world.

According to its website: “A unique feature of Chinese civilization is that its history has been documented and passed down uninterrupted for 5,000 years, sometimes in vivid detail.”

This history provides “Shen Yun with vast source material, making it possible to revive this ancient culture, devastated by 60 years of communist rule.”