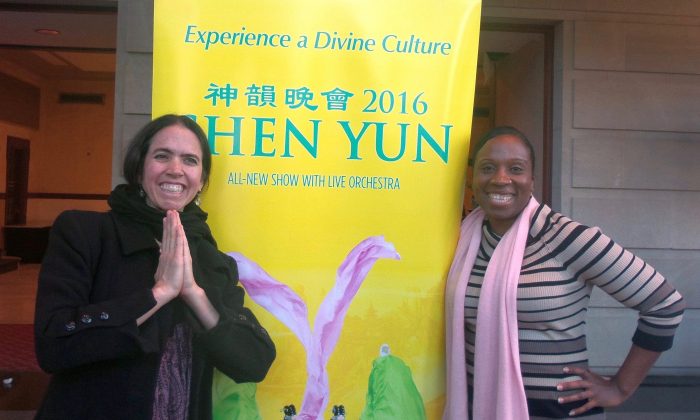 RALEIGH, N.C.—For thousands of years, traditional Chinese culture was built upon principles like kindness and loyalty, justice, wisdom and propriety, and respect for the heavens. These were traditions alive on stage at the Duke Energy Center for the Performing Arts through Shen Yun Performing Arts’ revival of 5,000 years of Chinese civilization.

For friends Rangadevi Hernandez, a caterer, and Krsna Kumari Devi Dasi, an artist, these principles the artists strove to live by were what made the performance so stirring on Jan. 24.

“I was supremely gratified by the presentation. It evoked so much emotion and feeling and thoughts, and [of] how good can overcome evil, and finding balance in chaos,” Ms. Devi Dasi said.

The friends brought up many facets of the performance that stood out, and spoke of how there was not only a surface-level inspiration but a deeper concept they took home from each of these facets.

The finale had been aptly named “Hope for the Future,” an inspiring name in and of itself for Ms. Devi Dasi. She said it also showed her “that light can always overcome darkness, and when people join together in a group and put a team effort together that nothing can stop them, nothing.”

As a graphic artist, she also loved Shen Yun’s digital backdrop. In addition to being a technical feat that was well done graphically, it gave the audience a real sense for “when they had the divine beings come down from the heavens.”

Even the costumes were not just amazing to the pair in color and construction. Ms. Hernandez said all together, “it made me think of the value of harmony in society.”

Ms. Devi Dasi similarly spoke of harmony, and said the colors evoked a feeling that made her appreciate the whole of the performance more.

Seeing such artistic accomplishment was “ecstasy” for her.

“I felt a range of emotion. There was a feeling of healing, there was sadness for what is taking place in the world, but there was also hope and there was gratitude,” Ms. Devi Dasi said.

For Ms. Hernandez, it was very moving to see what Shen Yun was able to do through art and culture. The performance was especially so for Ms. Hernandez because it brought light to the persecution of the spiritual practice Falun Gong in China today. Like many other faiths, art forms, and structures tied to the traditional Chinese culture, it has been targeted by the communist regime for eradication.

The spiritual beliefs she saw in the culture were similar to her own, Ms. Hernandez said. “I was very uplifted to see so much talking about the temporalness of this world and fixing your sights on something higher than this, so I was very happy to see many people exposed to this so beautifully,” Ms. Hernandez said.

“You must see it in your lifetime,” she said.