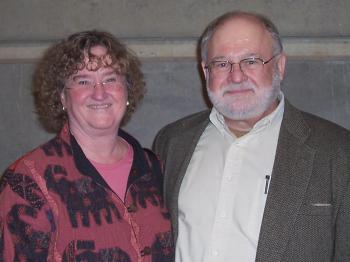 EUGENE, Oregon—Shen Yun Performing Arts presented an exhilarating celebration of classical Chinese dance and music at the Hult Center for the Performing Arts, on Tuesday, Jan. 11.

Mrs. Callery said she would like to learn more about the history and culture of China.

"I've never been exposed to it before. Actually, I am going to go do some research on the internet tomorrow for some things that I heard. Very interesting."

The elegance of the dance stories she said were "exquisite."

Mr. Callery said he also loved the performance. "I found it fascinating. It celebrates life and I really enjoyed that," he said.

He was captivated by the Shen Yun Orchestra, saying, "The orchestra was fantastic; we were sitting in the front row, so we were right on top of the orchestra. The Chinese instruments mixed with the Western instruments I thought was great."

Mrs. Callery said she was close enough to see into the orchestra pit and was struck by the haunting melody of the erhu, an ancient Chinese instrument played on two-strings.

"That woman is very, very talented, it was very beautiful," Mrs. Callery said.