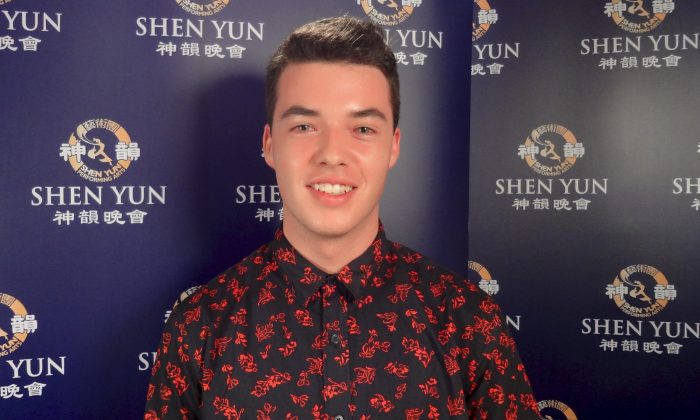 But by the end of the classical Chinese dance and music performances, they knew their lives had been enriched.

Luke Salt, aged 16, was at Shen Yun’s matinee session on Feb. 8. A year 11 pupil, he studies drama and ancient history at Cumberland High School. Last year, Luke represented Cumberland at a ceremony in Gallipoli to mark the ANZAC’s 100th anniversary.

“When they were playing some of the music, I felt as if the music was connecting with me and it was just a really unique experience for it to feel like it was moving inside of me,” Mr. Salt said.

He said the performance had opened his mind to China’s culture and history.

“I feel a lot happier, almost like I’ve been cleansed. I was tired before the show, but now I feel uplifted and more energized—amazing.”

Apart from being uplifted, Mr. Salt was also enriched by a message he is unlikely to forget.

“I think the message was: ‘If we are compassionate, and show compassion to other people, then we will receive good things back as well, whereas, if we try to hurt other people, in the end, it won’t help anyone.’ I will take it into myself, for how I want to approach my life in the future.”

Mr. Salt was surprised to learn that the spiritual practice, Falun Gong, was banned by the Chinese Communist Party, in China. The story dance, The Power of Compassion, is about a practitioner who rather than run, stops to help his aggressor after he falls.

“It’s a shame that today in China, they’re suppressing spirituality and people are being persecuted for trying to practice it,” Mr. Salt said.

These include studying harder and being more compassionate.

“I thought that was one of the great aspects of the show, about having compassion and helping others as well as ourselves.”

‘It was absolutely worth seeing’

CEO for Independent Community Living Australia, Isabela Gialluse, from the moment the curtain rose to reveal the first scene, Following the Creator to Renew All Things, she was captivated.

“Spectacular colours and the gentleness of the movement, it took you with it, with every movement,” she said. “I came in expecting nothing and it took me through that journey.”

That journey was conceived in 2006 by a group of talented Chinese artists in New York, wishing to revive China’s true 5,000-year cultural heritage, almost destroyed by 65 years of communist rule.

In its ninth season, Shen Yun takes from China’s legends, myths, and modern day stories, and through the performing arts, four companies simultaneously perform every year around 400 performances in more than 100 cities the world over, touching the hearts of millions.

“I just enjoyed it, the spectacular was the handkerchief dance, [Handkerchief Blossoms,] the way the colours turned and went into an umbrella. And the synergy of everyone’s movements was so in tune—it was absolutely worth seeing,” Ms. Gialluse said.

” I felt that the choreography was spectacular. The costumes, the synergy and the way that people danced—it was just really, really worth seeing, it was amazing.”

The Shen Yun website states, “Chinese dance is at the heart of what Shen Yun does. Known for its incredible flips and spins, and its gentle elegance, it is one of the most rigorous and expressive art forms in the world.”

Ms. Gialluse and George Karpouzis, a retired chief economist, were at Shen Yun’s evening performance, Feb. 6. Mr. Karpouzis enjoys studying history and was startled to see a story dance, Capturing Arrows With Boats of Straw, from the historical novel Romance of the Three Kingdoms.

“It surprised me that they would have something like that, that even I knew a little bit of, because I had read some part of Chinese history which I enjoy,” he said.

The story highlights the courage of Zhuge Liang whose army, although vastly outnumbered, easily won a battle that took place at the end of the Han Dynasty.

“What I enjoyed was the formation, when they moved in and out of the formation. They were always in a very straight line in all directions,” Mr. Karpouzis said, in awe of the choreographers who perfectly match a performance at hand to fit with the Shen Yun Orchestra and state-of-the-art backdrop graphics.

“The flying, the coming in, the people coming on stage, the choreography was amazing, so I’m very impressed.”

He said the pianist, accompanying the soprano singing bel canto style was “absolutely brilliant”, equally as brilliant, and the erhu virtuoso.

“That lovely girl … I just closed my eyes through that. You had to take all senses out just to hear her play. She was absolutely magnificent.”

Shen Yun’s website described the erhu as “incredibly expressive. An alto instrument with a middle-high musical range, its melodies can be tender or sonorous.”