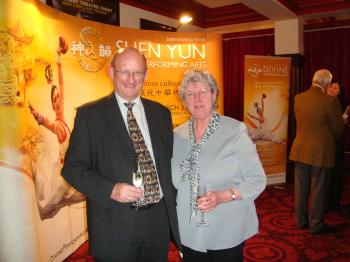 By Liu Wei
Print
EDINBURGH, Scotland—Lord Penrose came to see Shen Yun New York Company on April 8, in Scotland's capital city. He has served as a judge for almost twenty years. He is well known for his detailed inquiry into the collapse of a large insurance company.

Lord Penrose said of the performance, "It was excellent. Really excellent. Tremendous variety in the costumes and in [the] performance. And the singing of your two soloists is just superb. Very, very good."

Lady Penrose said, "I thought that the costumes were just amazing. And the lightness of their feet—just dancing around, it was lovely. I really enjoyed it."

The Monkey King Triumphs is one of the show's narrative dances from traditional culture. In it, Monkey uses one of his magical powers to defeat a wily and fierce enemy. He can pluck a hair from his head and create multiple monkeys. Monkey has been celebrated in opera, novels, children's picture books, and a television series. Lord Penrose said, "I always like the Monkey story." He said he and his son traveled abroad recently and saw two operas with tales from Journey to the West, the ancient Chinese novel in which Monkey is an important character.