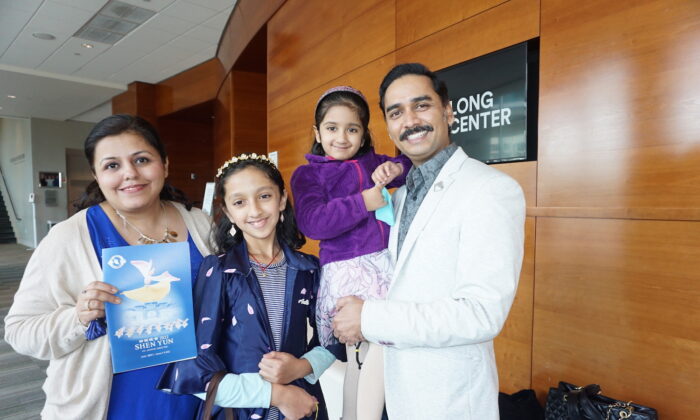 Lokesh Verma (R) with his wife Aashi Verma and their two daughters at the Shen Yun performance in Austin, Texas on Jan. 9, 2022. (Sally Sun/Epoch Times)

AUSTIN, Texas—Shen Yun is a perennial draw for families and couples for a simple reason: its universal message and appeal.

Lokesh Verma, an IT engineering consultant for a gaming company, and his wife Aashi Verma, brought their daughters to see Shen Yun.

Mrs. Verma saw a brochure for Shen Yun at her elder daughter’s school but wanted to wait until she was old enough to appreciate it. Now, four years later, the family has had their first Shen Yun experience.

“I enjoyed it so much that I’m thinking I should come next time also,” said Mrs. Verma. “The backdrop, the magnificent costumes, everything was amazing. And the story they tell interests me more to look into the culture.”

Shen Yun‘s mission is to bring back 5,000 years of Chinese civilization as it existed before communism. Through classical dance and live music, it has delighted audiences all over the world since 2006. At the core of its performances is a theme of faith and reverence for the divine.

“I think [faith is] one of the foundations for any society or any culture to grow,” said Mr. Verma. “We have been in India, so we see people practice every religion and people pursue different paths. They have freedom of speech and freedom of religion.”

“Spirituality plays an integral role in all the society, whether it’s Chinese, or whether it’s Indian or whether any other society because there is some more important power who is protecting us,” she said.

She added that the Shen Yun performance is important during our unique times.

“It can bring people together because it shows compassion, benevolence, kindness, so it really helps during this time,” Mrs. Verma said.

Realtor Mark Jensen surprised his wife Liz for Christmas with Shen Yun tickets. Mrs. Jensen, a vice president of a consulting company, had wanted to attend a performance for years.

“Just from the stories I saw portrayed it makes me want to learn so much more about China—about the culture and what has happened and what is happening now,” Mrs. Jensen said. “Through the beauty of dance, the stories really opened my eyes.”

“It came through in many of the dances [with] people having [an] awakening, like when there were the bandits that robbed the temple and then at the end [with] them coming and paying respects and praying.”

Mrs. Jensen added: “I think there’s definitely a message of hope and that we will all go through tribulations and challenges and come through on the other side.”

She recommends the show highly. “Knowing that it’s all-new every year, I think we might make it an annual tradition,” Mrs. Jensen said.