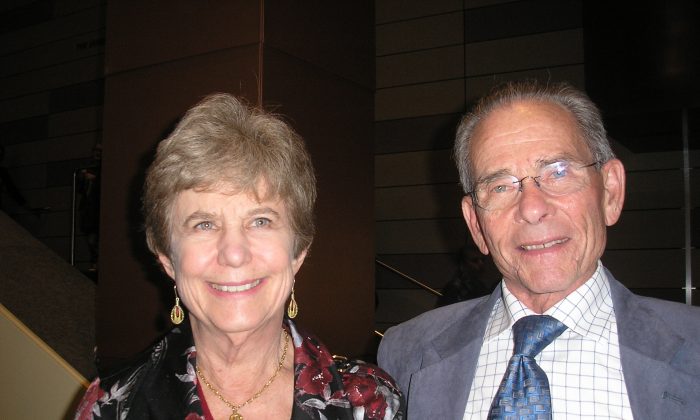 “And I’m looking forward to seeing it again next year,” said Mr. Midal.

Why does he keep coming back?

New York-based Shen Yun Performing Arts is a large-scale, live music and dance production, whose mission is to revive the genuine, divinely inspired 5,000-year-old culture of China, which was once almost lost, according to the company website. Each year the company produces an entirely new program.

“This is a beautiful performance,” said Mr. Midal. “We get to see people who are well-talented doing things that are just spectacularly beautiful, with very precise movements and good music,” he said.

“It is so rewarding for me to come see it again, and see something different.”

Pat Bret, a retired technical writer and editor, was also impressed with the performance.

“We really enjoyed the show,” said Bhret. “It’s very different than anything I’ve seen. It’s very impressive, how in sync the dancers are. And the singers—beautiful.”

“This is Shen Yun at first glance,” states the website. “But digging deeper, one discovers a sea of traditional Chinese culture. Mortals and divine beings merge on stage as one. Principles such as benevolence and justice, propriety and wisdom, respect for the heavens, and divine retribution, all come to life, washing over the audience. Originating from Confucianism, Buddhism, and Taoism, these ideals are the essence of traditional Chinese culture.”

Mr. Midal said the performance is surprisingly well-balanced, with no one person or facet of the show attempting to take over and draw too much attention to itself. The dances themselves often include at least a dozen performers on stage in complete unison.

“It shows me the great beauty that can happen when people pull together,” he said.

Mr. Midal and Ms. Bhret said those who have not yet seen Shen Yun are missing out on something wonderful

Tina Bushart, a former math teacher, and Karena Senchack, who works at the California State University of Northridge, spoke highly of Shen Yun.

“It was such an amazing experience,” said Ms. Senchack. “Something you can’t experience anywhere else.”

“I feel it was beautiful, amazing and incredible, awesome,” said Ms. Bushart. “Just so graceful.”

China was once known as the “Divine Land,” according to the Shen Yun website, with a belief that the divine transmitted a rich culture to the people of the earth. But through destructive campaigns, such as the Cultural Revolution, communist rule nearly destroyed this ancient culture.

“Entirely non-profit, and independent of the Chinese regime, Shen Yun enjoys the artistic freedom of New York, enabling it to now bring these ancient traditions to the stage,” states the website.

Ms. Bushart was surprised to learn during the performance that Shen Yun is not allowed to perform in China, and also that a peaceful spiritual mediation practice called Falun Gong has been brutally persecuted there for more than a decade.

A couple of dance pieces depict this aspect of modern Chinese history, which is shocking in its stark contrast to China’s ancient legends and traditions. Today in China, practitioners of Falun Gong, or Falun Dafa as it is also called, are beaten, arrested, tortured, or killed for meditating, reading scripture, holding up banners proclaiming Falun Dafa is good, or for even saying those words out loud.

According to the Shen Yun website, Falun Dafa practitioners in China face great personal risk by peacefully opposing the persecution and exposing the truth to their fellow Chinese citizens.

Ms. Senchack said the meaning of Shen Yun, “the beauty of divine beings dancing,” was very clear within the performance.

“I think it shows that it is just a part of their very being, their soul,” said Ms. Senchack. “Everything was very honoring and sacred. … I think it really helped to bring it to life for all of us who don’t know that much about Chinese culture and history.”

“We would tell everyone definitely to come to see it,” said Ms. Bushart.

With reporting by Marie-Paul Baixu, Jenny Liu, and Sarah Le