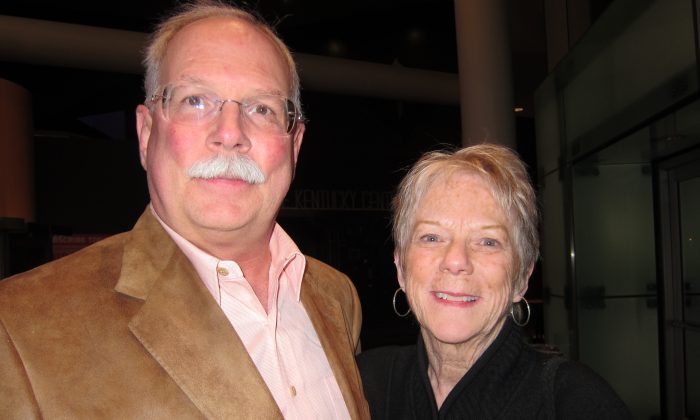 LOUISVILLE, Ky.—After seeing Shen Yun Performing Arts at The Kentucky Center for the Performing Arts, Whitney Hall, Dr. Ed Irish said it was “a whole kaleidoscope of certain inputs from the music, the auditorium, the costuming, the tremendous colors, and even the hi-tech part of it, which was, I thought, very well done.”

C. Edwin Irish, M.D., F.A.C.S. specializes in endocrine, gastrointestinal, and thoracic surgery. He is the senior partner and president of Surgical Associates in and around Portland, Oregon.

Mrs. Irish, a retired nurse, now works with a council on legislation, which makes policy that has to do with medicine and how it gets legislated.

While they were in Louisville for a medical meeting, the couple decided to enjoy an evening at the theater. “I saw this was showing here, and I wanted to come to it,” Mrs. Irish explained.

“I had heard about it, and I think the message is so important about bringing back the traditions and sharing the culture and getting the word out to more of us, and how important it is and how badly the young people in China want to hang onto their traditional cultures,” she added.

Shen Yun has four companies that tour the globe simultaneously, captivating theatergoers in 100 cities. Its mission is to revitalize traditional Chinese culture through the performing arts.

Dr. Irish commented, “to see the compassion that these young people bring to a culture that is thousands of years old, we can all learn from that.”

“We can use it as an example. And the communication and understanding between cultures, I think it’s very important. It’s very applicable,” he said.

Shen Yun’s program consists of 20 or so songs, dances and mini-dramas that depict scenes from China’s history, mythology, folklore, and literature. Bilingual English-Mandarin emcees offer a brief introduction before each piece.

“The narrative of each piece, I thought was very important because it put the whole thing in context.”

“Particularly for us to understand that this group can’t do this in their own country,” he added, “I think that is a powerful message.”

Dr. Irish is referring to the fact that although Shen Yun has performed in 20 countries, it still has yet to make its debut in Mainland China. Since it seized power in 1949, the communist regime in China has made it a national policy to forsake its own traditions and cultural heritage.

“I think the final thing was just this staggering issue that you’ve got this fabulously talented group of individuals, and they can’t perform in their native country, and I think that’s a sobering message, and you take that home,” he said.