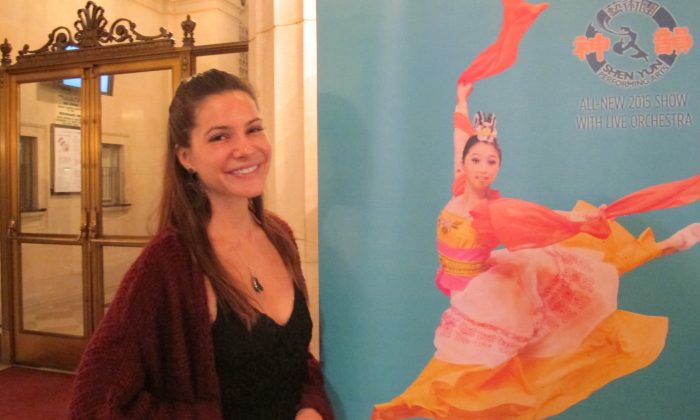 SAN FRANCISCO—With a background in ballet, journalist Julia Allison thoroughly enjoyed Shen Yun at the War Memorial Opera House on Saturday, Jan. 10. “I noticed that the dancers are precisely trained with impeccable movements and I appreciate the classical Chinese dance”, she said.

According to Shen Yun’s website, “Classical Chinese dance is composed of three main parts: bearing, form, and technical skill. Other than complete training in the fundamentals, it also entails systematic training in movements and postures, as well as very difficult jumping and tumbling techniques.”

What particularly struck Ms. Allison was the beauty and profound concepts she saw in Shen Yun that could benefit the Bay Area. “The messages are quite positive with deep ramifications for the consciousness of San Francisco.”

Ms. Allison went on to explain, “I was particularly touched by the second to last piece about Falun Gong, and that meditative practice not being allowed in China. That seems wrong, to say the least, and I hope that it brings consciousness to everyone here that until everyone is free, no one is free.”

She was referring to the spiritual practice Falun Gong which has been persecuted in China for the past 15 years. The practice is based on the principles of truthfulness, compassion, and forbearance.

Although she has seen many other dance performances before, Shen Yun is Ms. Allison’s first exposure to classical Chinese dance. “The dancers are exquisite, the tumbling is top notch, and it’s very clear that these dancers are amongst the best in the world.”