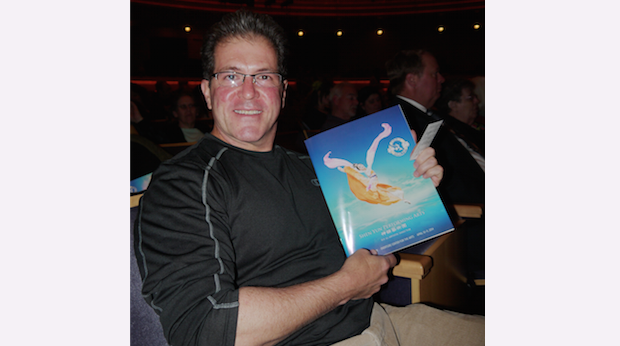 MADISON, Wis.—Billy Wigley, a global professional speaker, trainer, and consultant whose motto is “Don’t Get Mad…Get Skills!” was so impressed with the dedication of the Shen Yun dancers that he purchased a front row seat to get a close and personnel view.

“I love the show so far, said Mr. Wigley at intermission. I saw them practicing and it made me want to come see it. Now that I’m seeing it, I’m very happy that I’m here.”

Shen Yun’s mission is to restore 5,000 years of divinely inspired civilization through the performing arts—a culture almost completely destroyed through the communist regime and the Cultural Revolution.

His overall response to the show: “They are all very smooth. The stories, the background—it’s just awesome.”

He tells of seeing one of the lead dancers practicing late at night by herself.

He was so moved to purchase “the best seat that I can, so I can see them. I’m very impressed. I’m telling my friends in Las Vegas to go see it,” he said.

“Classical Chinese dance has its own set of training methods in basic skills and has strict training in both physical expression and specific postures,” explains the website.

“Through the universal language of music and dance, Shen Yun weaves a wondrous tapestry of heavenly realms, ancient legends, and modern heroic tales.”

Mr. Wigley said, “The stories are nice and the graphics in the background they work really well with everything that’s going on in the orchestra. It’s really perfectly on time, … I’ve been learning the stories that they’re telling. It’s really nice.”

In his line of work he also tells stories. “I’m actually telling stories. They’re telling of stories is without words. [It is through] the music and through the graphics and the way they move their bodies and their faces. They really make good faces. I’m also using language, so it’s easier for me. For them it’s harder because they have to show it,” he said.

He concluded with “It’s all good. I like it very much. I’m happy to be here.”