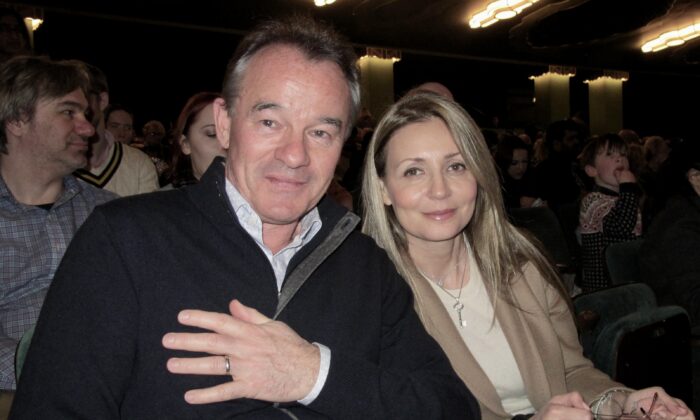 James and Ibtissem Cole at the matinee of Shen Yun in London on March 13, 2022. (Mary Mann/The Epoch Times)

LONDON, U.K.—”I think the dancers are made of rubber! They are so supple. It’s amazing,” said Ibtissem Cole, an investment manager. She and her husband James Cole, chairman of a waste business, were among the audience at the Shen Yun Performing Arts’ matinee on March 13.

“It’s like being transported into the past,” said Mrs. Cole. “It’s a great way to spend a Sunday afternoon and it’s a learning experience for us. And there are so many messages which are being transmitted through art and dance.”

“It was a very special event,” added Mr. Cole. He enjoyed the pieces that highlight the spirituality of Chinese culture, and the state of religious freedom in China today.

“It’s very important to remember that we are mere mortals in a tiny little universe,” he said. “But actually, the world is a much bigger place. And we are just a part of that for the time being.”

“I think the Chinese culture is a combination of happiness, wisdom, the ability to connect to the abstract, but also full with sad events because of what’s happening in China today,” said Mrs. Cole. “So we love that contrast and combination of the good and the bad, the positive and negative. But there is definitely a strong message of hope and perseverance. And a call to just carry on and express emotions, the past, the present and the future through art.”

Christina Loughran used to be a criminal barrister and is now a psychologist in a top law firm. Ms. Loughran is ethnically Chinese with roots in Hong Kong.

“I came to this country when I was six, in 1968, because my father didn’t want his children growing up in a communist regime in the future,” she said.

She learned more about her own cultural roots through Shen Yun.

“It’s very exciting and the colors are very glorious. It’s difficult to put on a show like that with Chinese dance because I never knew what classical Chinese dance was.”

Like many aspects of traditional Chinese culture, classical Chinese dance, was almost lost due to the Cultural Revolution when all that was old was deemed undesirable.

“That’s something I think that the world needs to know and recapture,” commented Ms. Loughran. “Because there has been a lot of bad publicity because of COVID and communism. I felt that it’s good to capture the cultural Chinese aspect of Imperial China before communism, to show the glory of the culture.”

To anyone who has yet to purchase tickets to Shen Yun, she encourages them to see another side of China: “Keep an open mind and not be sucked into the present political climate of what’s going on in China through communism, and to rediscover the cultural artistry of original Imperial China.”