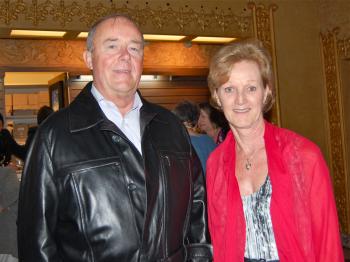 Shen Yun Dancers ‘A huge amount of expression in their dancing’

BY Leigh Smith TIMEMarch 2, 2011 PRINT
MELBOURNE—Melbourne, known as the arts capital of Australia and the world's second most livable city, was the destination of a business trip for Trevor Lacy, a stamp auctioneer, and his wife, Ane Marie Lacy, from Perth.

Mrs. Lacy searched for entertainment in Melbourne on Wednesday, March 2, and found that Shen Yun Performing Arts International Company was performing at the Regent Theatre.

“I thought that it was just exquisitely done,” Mrs. Lacy said of the New York-based Shen Yun. “The costumes were fantastic, the dancing was out of this world, and they had a story to tell.”

Enthusiastic applause, an encore from world-renowned tenor Guan Guimin, a curtain call and a standing ovation suggested the audience agreed with her summation.

“I enjoyed it, I loved the gracefulness of it, the beauty, the expression … there was a huge amount of expression in their dancing. There seems to be a lot more intricacy involved in it.”

Mr. Lacy added that he wished more people could see Shen Yun and wished the show could go to Perth where he believed it would be very well attended.

“It would fit in very well into His Majesty’s Theatre," he said.

He expressed his admiration of the Shen Yun performers, saying, “A lot of people put in a lot of hard work, to put on an excellent show.”

Mrs. Lacy agreed saying that she would tell Melbournians “come and see it [Shen Yun]. It’s a different type of culture and dance, beautifully executed, and it does have a story to tell.”

Mrs. Lacy, was surprised to hear that Shen Yun was unable to perform in China and said, “that tells another story.”