Shen Yun Comes ‘Just in time to make you happy’ 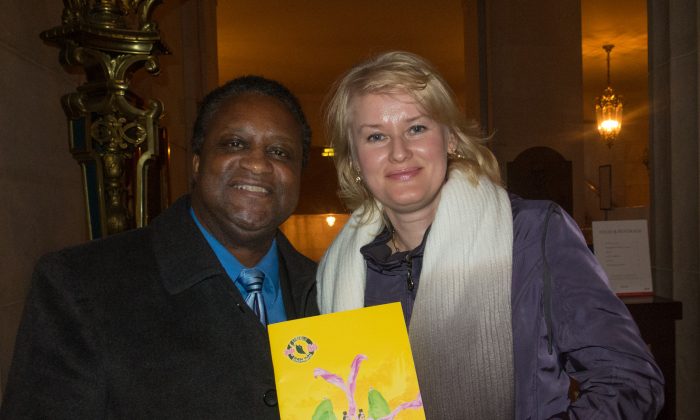 SAN FRANCISCO—One gentleman saw Shen Yun as a healing force, which evokes a traditional Chinese belief that music is medicine. “I loved the show and have to say that it’s like a healing for anyone,” said Harold Pernell, at War Memorial Opera House on Jan. 9.

Shen Yun came “came just in time to make you happy, to enlighten you,” said Mr. Pernell, a computer technician.

It seems the artists of Shen Yun were achieving the result they hoped for. Words on the Shen Yun website echo Mr. Pernell’s response: “Throughout history almost every culture looked toward the divine for inspiration. Art was meant to uplift, bringing joy to both the people who created and experienced it. It is this principle that drives Shen Yun performers and their art.”

For his wife, Lana Pernell, Shen Yun inspired gratitude. “I would like to thank everybody, dancers, performers, everybody who created the show, who performed in the show. Thank you very much. We appreciate it and we really needed it in our times. Thank you.”

Mrs. Pernell said the world full of conflict, wars, and troubles, and that is why she thinks Shen Yun is needed now. “We are living in difficult times and hard times, and we need to grow spiritually to survive in this world, that’s what I think.

For Mrs. Pernell the way to handle a dangerous world is to stay true to one’s values. “We need to, somehow stand firm for our beliefs. Do not participate in many evil things. We know what is good, what is bad. So we have to choose our side, good or bad.”

Shen Yun’s art is based on spirituality, according to its website. “When you stop and look up at Michelangelo’s Sistine Chapel, you can feel this connection between art and spirituality beaming down from the high ceiling’s apex where God reaches out to touch Adam’s hand.”

Mr. Pernell related to the spiritual themes in Shen Yun. He said he was glad that the performance referred to the Creator, because “it’s good to know that someone higher than us, greater than us has … better wisdom and understanding than man.”

This is a universal belief, in his opinion. “I think that man has fallen short of perfection. So this show was really, not just for say, one culture, good for all cultures, because we are all a part of mankind.”

Mr. Pernell said Shen Yun is important exactly because of what his wife said. “It brought out the morals of every individual, of what they choose to do.”

“Many of the tales and characters depicted in Shen Yun dances draw inspiration from ancient records and classics. Based on documented historical events, these stories give abstract ideas—like loyalty, filial piety, selflessness, and tolerance—a concrete form. Timeless favorites, these stories are treasure troves of ancient China; once opened, the traditional Chinese culture immediately reappears,” according to Shen Yun’s website.

Mr. Pernell repeated that Shen Yun had arrived just at the right time. He hopes all people can resolve their conflicts. “We need to come together as one nation, one country—all different creeds and all different languages, and say, ‘Hey, we are all human. We all want to work toward the good.'”