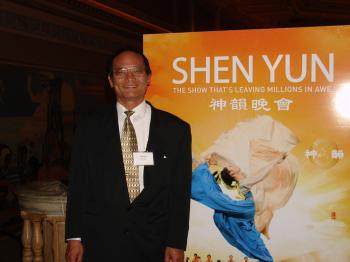 CLEVELAND, Ohio—Playhouse Square was buzzing on Saturday night, May 29. Watched by a full house, Shen Yun Performing Arts displayed dance after wonderful dance, accompanied by live music from the Shen Yun Touring Company Orchestra, as together they brought to life legends and contemporary stories from China’s rich and ancient heritage.

Amongst the many inspired audience members was Jung Jing, the publisher of Ohio Chinese American News Inc. Mr. Jung has been closely following the New York-based company’s tour, with this being his fifth time to see Shen Yun. He first saw the show in Detroit, Michigan, then in Cleveland, next Cincinnati, and most recently Columbus. Tonight he said, “I drove two and a half hours. I will drive two and a half hours back.”

Mr. Jung explained his impression of the show. “What I see is all those performers are the second generation. … Shen Yun bring the opportunity to enrich the Chinese culture here … That’s the reason I am here. I want to witness the growth of Chinese culture here.”

‘A beautiful way of expressing what is the soul’

Dr. Phil Belzunce is a psychologist and also has a Chinese heritage. He comes from the Philippines and his great grandfather was Chinese. For this reason he could relate very well to the show and loved it, describing it as “excellent.”

Dr. Belzunce continued in his praise of Shen Yun, saying: “Excellent, everything is excellent. Everything flowed well. It’s like the yin and yang and the flow, the flexibility.

Dr. Belzunce attended the show with his wife and friends, and said he would of course tell his other friends, adding, “I highly recommend it.”

‘Everything seems so right’

Daria Ritzer comes from Russia and is studying for a Masters in Business Administration at Cleveland State University. She was accompanied by some friends from Russia and really enjoyed the performance. She said, “We liked the costumes, they’re beautiful and vivid. We like all the dancing. We are discussing it, and everything seems so right.”

She thought the dancing was of a very high standard, commenting: “Very beautiful, very interesting. We also like the fact that we’re learning about the Chinese culture, the different plays, the dances, there are definitely many things I didn’t even know existed. I think about the expression of the actors and dancers, so I think it was definitely great, so we are really enjoying ourselves.”

Ms. Ritzer continued: “We loved everything from the dancing to the play where the woman was not allowed to express her own beliefs. I was definitely touched by that and it involved many emotions in me.”

She felt she had learned some very interesting things, explaining: “I would say some folk, some traditional things that we do not see in our everyday life because it is completely different here. Everything like the play with the tiger I believe is based on a fairy tale or something, very beautiful and I though that it expressed the humor of that time.”

Wu Song Battles the Tiger is based on a scene from Outlaws of the Marsh, one of China’s most beloved novels. In this dance, villagers are terrorised by a man-eating tiger until an unlikely hero arrives and finds the courage to face the beast only after he has consumed three bowls of wine.

With reporting by NTDTV and Stephanie Lam.