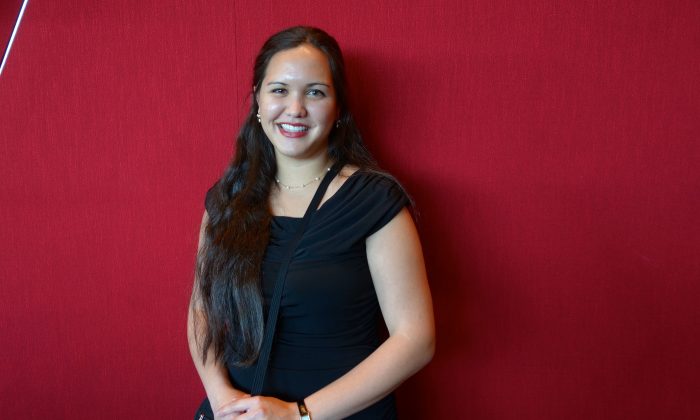 Kelly Van Roy truly appreciated Shen Yun Performing Arts, saying the Shen Yun artists are able to express “the best both from the divine to the commonplace to the very inner being of the human soul.” (Mary Silver/Epoch Times)

ATLANTA—Kelly Van Roy, a college student, drove two hours from Georgia College to see Shen Yun Performing Arts because she’d been dying for two years to see the company. Happily her parents obliged her with a wonderful Christmas present, and on Jan. 17 she saw Shen Yun’s final performance in Atlanta at the Cobb Energy Performing Arts Centre.

The double major in liberal arts and business management has always loved East Asian culture, so the classical Chinese dance and music company was very appealing.

The company, formed in 2006 in New York, aims to revive China’s millennia-old traditional culture—a culture once considered divinely inspired. Traditionally, the faiths and philosophies of Confucianism, Buddhism, and Taoism formed the ideals of the Chinese people.

Ms. Van Roy said that she felt emotional watching some of story-based dances, and laughed at others: “I liked the display of not just the culture, but across all ages and all walks of life, they do the best from the divine to the commonplace to the very inner being of the human soul.”

The inner soul Ms. Van Roy noticed in the dancers is called “yun” or bearing, an integral component at the heart of Chinese classical dance. Bearing allows the innermost spirit of the dancer to be conveyed to the audience.

As a dancer herself, Ms. Van Roy truly appreciated the dancers’ hard work, saying “I know how hard it is to do a performance repeatedly with the same level of precision and power.”

Although she said she can’t do the complicated lifts and spins—also a component of classical Chinese dance—she admired the dancers for their precision, and for the difficulty in accomplishing these technical feats.

She also noticed the similarity of classical Chinese dance to some martial arts moves.

As a matter of fact, “Several thousand years ago, martial arts (wushu) appeared in China. At the time, many types of performing arts were influenced by martial arts movements, techniques, and flips. The original forms of many classical Chinese dance movements were similar to those of martial arts; it was just that they were performed differently,” Shen Yun’s website clarifies.

If Ms. Van Roy could talk to the dancers, she would tell them: “wonderful job and I appreciate it.”

“It’s been really amazing!” she said.