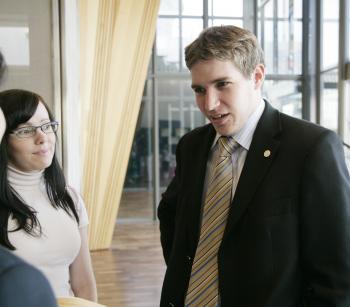 “It’s going very well, very enjoyable. All the performances were very good. All the colour, all the activity and the enthusiasm, it's fantastic. I think the costumes are fantastic, the colour and the fact there are so many scenes that are completely different—I think it adds life to the show. I do enjoy the theatre, so this production hit right down the valley [meaning that it was very suited to his tastes],”  he said.

Mr. Coe is the Australian Liberal Party shadow minister for urban services and several other portfolios in the Australian Capital Territory. He brought his partner along to the show with him. What made them come to the show? “Well I heard a lot of people say it's a spectacular event, so we came along with many expectations.”

Kath, his partner, also shared her thoughts: “I really liked the skirts [Dance of the Yi]—they brought such colourful skirts, I thought they were fantastic. Because there were no words, there's a lot of emotions and feeling you can get from witnessing it and enjoying it. It’s nice and colourful.”

Neither of them had seen Chinese classical dance before, and Mr. Coe commented that much of it was new to him. When asked whether they were looking forward to the second half, they both said in unison, “Yes, of course!”