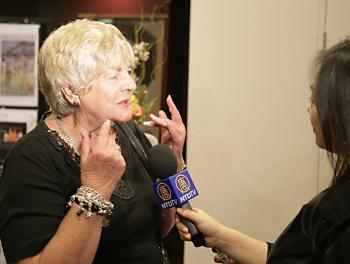 Marion recalled the singing which she described as `beautiful—so strong and so powerful.` (NTDTV)
Arts & Culture

Retired Dancer: ‘I didn’t want it to finish’

CANBERRA, Australia—Marion, a retired dancer, loved every part of Shen Yun Performing Arts performance when she saw the New York-based company in Canberra on March 30, at the Canberra Theatre.

“I can’t see anything you wouldn’t like in it. The costumes, the dancing, the singing, the music, the scenery—just everything. … They’re really to be congratulated. Brilliant job,” she said.

Marion said the dancing was “spectacular,” the dancers impressing her with their agility. "I haven’t got enough words to say how beautiful the whole thing was … I just loved every part of it.

“The finale was very spectacular, but I think as far as the staging was concerned, the dance where the mountain comes tumbling down—how they organised that to be so great. The dancers had to be perfect, in their right spots at the right time for that to come down in the background.

“You know, they’re all to be admired, really admired."

From there Marion recalled the singing which she described as “beautiful … so strong and so powerful.

“I’ve never heard Chinese singing like that. Usually, we hear very high-pitched Chinese singing, and this was so deep and beautiful. The males and the ladies, too, were just wonderful.

“The lyrics were very moving, very emotional, very spiritual, and you really—there was sort of a story behind every one of them, it was just something else. It was also very deep and meaningful, it was just beautiful. I don’t think we have lyrics like that so much in English songs.”

“I hadn’t realised that there was so much behind Chinese culture. It was a learning curve for me, as well as just being so entertaining and just lovely.”

She said that the final scene Knowing the True Picture Offers Ultimate Hope, had been most moving. “I got very teary, because it was, again, such a big production. … I just loved it."

She said she would be at the head of the ticket line when the show returned next year. “I really didn’t know what to expect this time. I had no idea what it was going to be about. And I’m just so pleasantly surprised, and yes, absolutely, I would go and see it again and again.

“The costuming,  the dancing, and the beauty of the whole thing was just wonderful, I didn’t want it to finish.”

This article was written with NTDTV, a media partner of The Epoch Times.