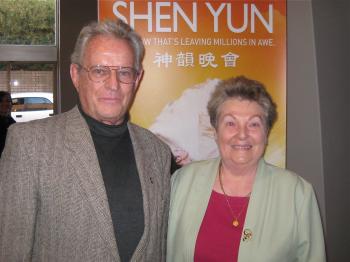 CANBERRA—Vladimir Orsag, author of The Balkans Conspiracy, a novel about a Yugoslavian dictator saw the Shen Yun Performing Arts at the Canberra Theatre on Sat. May 22.

“I liked the entertainment. It was really colourful,” Mr. Orsag said of the New York-based show of China’s 5,000 history to the present.

He has lived in Australia for 40 years; he was denied the right to live in his own country because of the dictatorship there, he therefore said, he cherished that now “I live in democracy.”

Mr. Orsag explained that under communism his family had suffered. He was expelled from school, then his family fled Yugoslavia, gaining political asylum in Australia; because of what had happened to his family, he feels that communism will disappear in China as it did in his own country.

He was moved by the performances saying he had never come across a group with “such beautiful dresses, such beautiful stories. I can’t understand Chinese, but being open minded you can work out what the story is about.

Shen Yun brings Chinese classical dance to the stage with handmade costumes. Mr. Orsag said the costumes were “absolutely adorable, especially the gold one and the jewellery and the sky.”

He was impressed with the choreography saying, “You have such beautiful women, it’s absolutely incredible, the way they walk, because they make a small walk, looks like they are floating on stage. It gives us this impression, beautiful.”

This is the first time the Shen Yun Orchestra, consisting of traditional Chinese and Western instruments, has toured Asia and Oceania. “It’s beautiful … the impact of the music—absolutely amazing,” said Mr. Orsag.

As a writer, Mr. Orsag said he would write about Shen Yun, and would send his story to a film director and also a friend who is in theatre, as well as his readers.

With reporting by Deming.

Shen Yun Performing Arts New York Company will perform four shows in Canberra from May 21–23; then travel to Melbourne for seven shows from May 25–30. For more information visit ShenYunPerformingArts.org