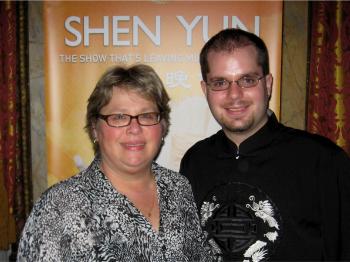 ‘I think everyone should get to see this at least once’

Attending the performance were Patricia Kobrin, who works for the US Department of Commerce, and her son Joel, a barback and waiter. Ms. Kobrin was treating her son to the show as a birthday gift. He had first come across Shen Yun when he saw a promotional video playing in a shopping mall and he decided he really wanted to see more.

Mr. Kobrin describes himself as "a huge fan of oriental culture and pretty much anything that comes out of the East." He loved the show, saying, "I was really blown away. There was so many different colours and there was a whole bunch of history there that just really struck me."

He was particularly impressed by the animated backdrops, explaining, "I loved that the background matched what the characters were doing. I love how everything kind of came out of the video screen. They showed there was a story going on and the story actually came alive in front of you, and it was very impressive."

Mr. Kobrin also enjoyed other aspects of the performance, adding, "I loved the dance and I especially loved the costumes. They were very intricate. You really can't duplicate a show like this and it's an amazing thing that I think everyone should get to see at least once."

He appreciated the stories depicted by the dancers and thought "some of the stories were very dramatic," particularly the ones about freedom of belief relating to the current situation in China where the spiritual discipline of Falun Gong is repressed. "I loved the way it was portrayed. It was honest and … it really brought out a bunch of emotions. It was sad, it was happy, it was very hard emotionally to watch this go down [happen] and I loved the way it made me feel all these emotions when I didn't expect them."

Ms. Kobrin was also very impressed by the special effects, particularly "how the dancers in the video were on the screen and then appeared on stage." She also enjoyed the vocal soloists.

She found the show "very very enjoyable," adding, "I was very impressed with the number of people in the audience who are supporting the arts, [and] supporting the production itself."

With reporting by Grace Yin.