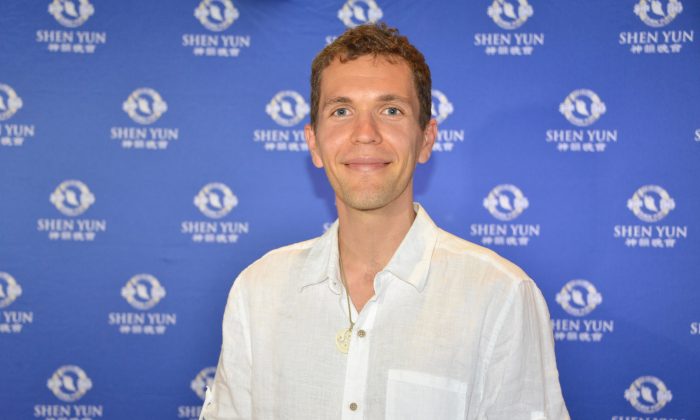 “I really enjoyed the movement, I’m big into choreography and to watch the way the girls and the guys flowed, and the energy that they emoted was really cool, it brought a smile to my face for sure,” he said.

Mr. Juul has worked as a digital compositor for major Hollywood films including: “The Matrix” trilogy, “Avatar,” “The Lord of the Rings,” “Star Wars,” and “The Hobbit” trilogy. He is currently working on his own animated martial arts feature film, titled “White Tiger Legend.” He attended the evening performance of Shen Yun at St. James Theatre on Feb. 16.

New York-based Shen Yun has been touring internationally for 10 year with the mission of reviving China’s divinely inspired culture. According to the website, “through the universal language of music and dance, Shen Yun weaves a wondrous tapestry of heavenly realms, ancient legends, and modern heroic tales, taking you on a journey through 5,000 years of Chinese culture.”

As a visual effects artist, Mr. Juul applauded Shen Yun’s use of visual elements and how the digital backdrop made the performances more “dynamic.” In particular he was touched by how the colours brought out different emotions for each piece. One such piece titled “Fairies of the Sea” uses long silk fans and soft blue skirts to evoke images of rippling waves, swirling to the rhythm of cerulean waters.

He added that involving the technology from the backdrop and bringing that to the dance was very entertaining and allows modern people to better experience and connect to ancient Chinese culture. Mr. Juul himself is single-handedly using motion-capture technology to act out all the characters in his upcoming animation film.

Shen Yun’s digital backdrop creates vividly animated settings that extend the stage and transport the audience to a world where heaven and earth are one.

But aside from the visuals and backdrop, Mr. Juul was fascinated by the passion he felt oozing from the performers.

“When I see people enjoy themselves, and sharing what they love to do, it makes me light up. … I know Kung Fu, but I don’t know how to dance. I could see these people love what they’re doing, and that was amazing to watch them really just put it out there.”

Mr Juul experienced a deeper connection with the traditional cultures and values shown throughout the performance. He describes Shen Yun as “Love, grace and compassion.”

You could see the happiness on all the performers’ faces.
— Kory Juul