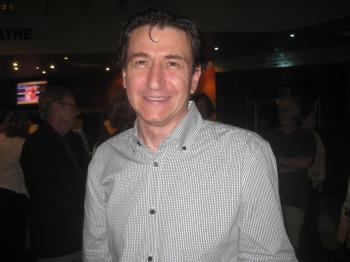 By Luo Ya and Oliver Perret
Print

Mr. Lynch, a drama teacher, was there to experience the depiction of 5,000 years of Chinese culture through music and dance.

“Wonderful show! There's a lot of colour. I think there's an excitement. … There's a really great feel in the energy.”

Mr. Lynch was originally trained as a child actor many years ago. He has run youth theatre and mainly worked in devising and creating theatre programs, worked with recap Australia and Queensland for about 10 years. More recently he has been working as a contractor to School of the Air creating digital films with young people.

He was appreciative of the opportunity to learn more about Chinese culture and felt it was a good medium to inform people.

“I think the willingness to use the medium to educate people, especially here in Australia, about the culture, the costumes, the colour, and also the beautiful words in the songs, with the translations. I think that's excellent.

“I particularly loved the story that had the young person, the family man being persecuted. That was a wonderful story. I thought the child actor in that was excellent.”

Mr. Lynch was referring to the dance Heaven Awaits us Despite Persecution, which tells of oppression, a painful reality for many millions of persons in China today, as witnessed by an innocent family whose father is persecuted for practising Falun Dafa, a traditional spiritual discipline. Theirs is the human face of the countless tragic, broken lives in China we seldom hear about. The scenes that ultimately unfold in this dance present a message of hope and bespeak of a longstanding Chinese belief that good people are ultimately rewarded, even if not in this lifetime.

Mr. Lynch summed up by saying: “A wonderful cultural experience that covers many different aspects of Chinese culture.”

Owen, an English tutor,  was also moved by the dance Heaven Awaits us Despite Persecution. He thought that powerful and inspiring message shone through during the show.

“Shen Yun gives a message of hope, to keep going, and truth will win. It was truly excellent. … Very moving and a divine programme,” he said.

Owen enjoyed the educational component, since he learned a lot of fables from ancient China, such as in the dance Legend of the Brush that depicts the origins of writing in ancient China. Some scholars worked laboriously to carve characters into bamboo, and they are given a wonderful gift from a mysterious, solitary man from the mountains. This gift then rids them of this tiresome burden.