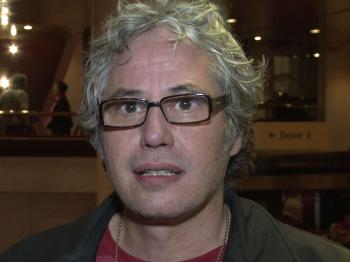 Paul Minshull, who is renowned in the music industry in Australia. (Courtesy NTDTV)
Arts & Culture

In the audience was Paul Minshull, who is renowned in the music industry in Australia. He has worked for record companies chiefly, as Australian strategic marketing manager and national promotions manager for Universal Records and Polygram for 13 years. During his time at Universal he worked with major international artists such as Andre Borcelli, Russell Watson, U2 and Elton John. Since then, he has been at the helm of Paul Minshull Management, handling independent artists such as 2008 AIR award winner Bec Willis, Neil Murray and Shane Howard.

This is the fourth year the New York-based Shen Yun has included Australia in its World Tour, and the first time the live orchestra of both traditional Chinese and western instruments accompanied them.

Mr. Minshull said he thought the music was fabulous.

He continued, “I love going to the theatre and to hear an orchestra that was so different from really the classical instruments right the way through to all the Chinese instruments, it was an eye-opener for me. It was fantastic, it really was. It was very good.”

Shen Yun has solo singing performances and Xiaochun Qi played the erhu accompanied by Peijong Hsieh on the piano. Mr. Minshull and his wife were particularly taken with this performance. He said, “the lady at the end, the two stringed instrument [erhu] was just beautiful. It really was, it was fantastic. I think my wife was very keen to hunt around and see if we can get one and give it a go.”

The live orchestra plays original scores and Mr. Minshull thought the music for each performance was “very suitable.”

The Drummers of the Northwest was a hit with his wife. The Northwestern region of China is proud of their drumming, which spans some 2,000 years of Chinese history. The waist drummers dance is full of pulsing energy, vibrant leaps, and vigorous rhythms.

Mr. Minshull said, “My wife really is into a lot of drumming, she plays the chembeh over here so we have a lot of drumming that goes on in our household. A lot of it was just fantastic, it just went so well with the music. It was terrific, it really was.”

Mr. Minshull had not experienced the combination of Eastern and the Western instruments before. He said, “I have a lot of interest, I play the guitar a little bit, any instruments I guess fascinates me.”

Shen Yun brings thousands of years of Chinese culture to life through ancient legends and modern stories using music and dance. One in particular that has moved the hearts of many audience members is the depiction of the present day persecution of Falun Dafa in China. Falun Dafa is a peaceful self improvement meditation practice.

Mr. Minshull felt Shen Yun was a very good education in Chinese culture. He said, “it was really good to get an overall picture of China, going back right through the history. I’ve got to say as well, I guess knowing some of the persecution that goes on there now, it was very good that they included all of that as well. That was a crucial piece that, a show like this is obviously showing off China as a whole, I think that should certainly be in there. It was very good to see, it was very well done.”

Shen Yun Performing Arts New York Company will perform at Brisbane’s QPAC Lyric Theatre for three shows on June 1 and 2, bringing the Oceania leg of its 2010 World Tour to an end. For more information visit ShenYunPerformingArts.org