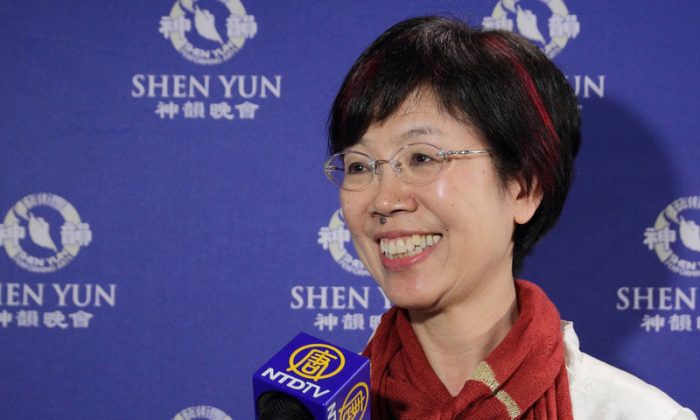 TAIPEI, Taiwan—Though Legislator Yu Mei-nu attended Shen Yun performances in Taiwan for three consecutive years in the past, she still made it to the performance presented by Shen Yun Performing Arts World Company on the evening of March 19, 2016.

Praising Shen Yun’s persistent endeavor to create a new lineup of programs every year to promote traditional Chinese culture over the past ten years, Legislator Yu said, “It’s not easy for a performing arts company to persevere touring the world for ten years in a row. With some new elements added each year, though some stories or dances might be similar, I have different inspirations when seeing them at different times.”

As a concurrent Deputy Secretary General of Taiwan Law Society and founding Director General of the National Alliance of Taiwan Women’s Associations, Legislator Yu said that she was especially impressed with the piece “Monks and Red Guards.”

“Through the performances, in the form of culture and arts, [Shen Yun] illustrates [the truth that] even red guards can be reclaimed by means of Buddha Law, compassion and love,” she explained.

When it comes to Shen Yun’s tirelessly promoting traditional Chinese culture the world over, she said, “Culture and arts have no borders, and they have a very strong penetrating force. Through this kind of performance, [Shen Yun] can help people reinforce their strength to face the so-called evils.”

“Nowadays, the persecution against religions and faiths is going on in China, and human rights lawyers are arrested too,” Yu Mei-nu said, “Through Shen Yun’s promotion of culture and arts as well as the principles of Truthfulness, Compassion and Tolerance, I believe the evil will eventually be subdued one day.”

Minister of Examination Qiu Huajun attended Shen Yun’s matinee on March 19, 2016 at the National Taiwan University of Arts. He spoke highly of Shen Yun for showcasing the best and most beautiful parts of Chinese culture, and said Shen Yun is an aesthetic and cultural feast with “divine inspiration and divine beauty.”

Knowing the fact that Shen Yun artists are trained at the Fei Tian Academy of Arts in the United States, the Minister hopes that colleges in Taiwan can follow the example to carry forward traditional Chinese dances in the future.

The minister was especially in awe of Shen Yun digital animated backdrops that could give an audience a miraculous feeling of transcending time and space. “Shen Yun synchronizes classical dance and modern technology. It really broadens our horizons.”

He praised all those behind the scenes for their conscientiousness in making all the arrangements including choreography, costumes, decorations, and so on.

“It’s a precious opportunity to appreciate the performances of both imperial court dances and folk dances. It’s also great to see them carried forward” by Shen Yun.

Minister Qiu was deeply impressed with the piece “Poets of the Orchid Pavilion.” He pointed out that one of the questions in Taiwan’s university entrance examination last year was about the “Preface to the Poems Composed at the Orchid Pavilion,” and said that it’s meaningful to include that program in the performance.

In the year 353, a group of scholars played a unique drinking game whereby they created an anthology of 37 poems. In the dance “Poets of the Orchid Pavilion,” dancers use fans to mimic the scholar’s brushes as they write with elegant strokes. Behind them appear the words to the anthology’s preface, now considered one of the greatest works of Chinese calligraphy.

Shen Yun demonstrates Chinese culture through the performances of legendary and contemporary stories about loyalty, filial piety, integrity and kindness.

Referring to the piece depicting Falun Dafa practitioners’ steadfastness against the persecution, Qiu Huajun said that he was deeply touched by the performance: “It really demonstrated the spirit of Truthfulness, Compassion and Tolerance. [These principles] are what our society lacks, which should be achieved through cultivating the mind,” he added.