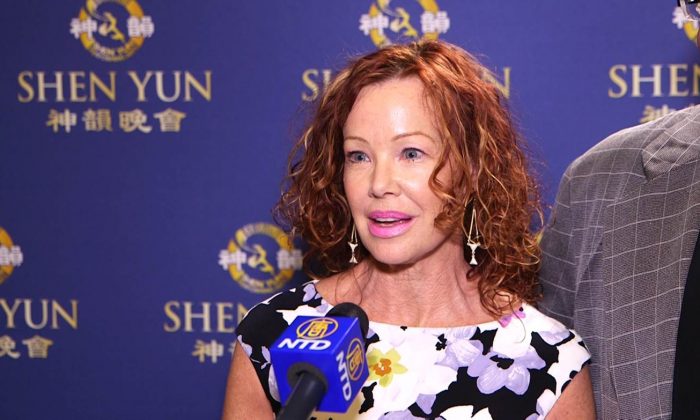 LAS VEGAS—Katherine Ramsey said she decided to see Shen Yun Performing Arts after she ran into a young woman who had attended last year. The woman told Ms. Ramsey that the performance had changed her life, and now Ms. Ramsey completely understands.

“I’m just inspired,” said Ms. Ramsey. “The beauty, the colors, the majesty of it, the humanity of it, the wisdom that you receive from it.”

Shen Yun is reviving the 5,000 years of true Chinese culture, which was once considered a gift from the heavens, through the universal language of music and dance, according to the company website.

Ms. Ramsey, who sells homes for RKB, attended the Shen Yun performance at Reynolds Hall in the Smith Center for the Performing Arts on Wednesday evening, with her friend Carlos Espinosa, a retired master chef.

Mr. Espinosa said they both teared up during the performance.

“For me it was nostalgic, and it was tears of joy, and tears of happiness,” said Mr. Espinosa. “There’s also tears from learning from the past, to hopefully better myself and the world and the present.”

Although at first glance, Shen Yun showcases the world’s top classically-trained dancers, a one-of-a-kind orchestra with both Eastern and Western instruments, vibrant handmade costumes, and stunning backdrops, audience members say it is much more.

“Principles such as benevolence and justice, propriety and wisdom, respect for the heavens, and divine retribution, all come to life, washing over the audience,” states the website. “Originating from Confucianism, Buddhism, and Taoism, these ideals are the essence of traditional Chinese culture.”

“You could see how much it meant to them in their eyes,” said Ms. Ramsey of Shen Yun’s artists. “It resonates through your heart and through your soul.”

Mr. Espinosa enjoyed a dance piece that tells the tale of a young monk, whose martial arts skills fall short until he sincerely asks for help from the statue of a heavenly warrior.

“It just reminded me of growing up,” he said. “To get the strength and do what you need to do, but it was all spiritual and mental.”

Another piece that touched Mr. Espinosa was a dance that depicted peaceful meditators being attacked and brutally beaten by police, but when an officer becomes hurt, the spiritual practitioners help him.

“You had love, you had compassion, and then you had anger and not understanding,” he said. “Even when [police] hurt and killed someone, they still took that person in and carried [him] on to that person changing his heart and his way of thinking.”

Ms. Ramsey was struck by the fact that Shen Yun can’t be seen in China today under Chinese Communist Party rule.

“Just to see the humanity of it, and to know that you can’t enjoy something like this in your own country amazes me and saddens me,” she said. “We are all from the same place, and we all deserve to be happy.”

“The world somehow has to pull together, and one person at a time who believes that and touches another person, it’s going to happen,” she continued.

Ms. Ramsey said she would tell everyone about Shen Yun, and next year she will come back and bring her grandchildren. Mr. Espinosa said he would also be back.

“I would love to see this again next year to see the difference,” said Mr. Espinosa. “Anyone who hasn’t seen it should see it.”

Shen Yun makes you ‘Feel like you’re in heaven’

Audience member Donna Zekyrias, owner of Divine Design, said when she found out about the upcoming Shen Yun performance, she really wanted to go, and she also put a large Shen Yun poster and Shen Yun brochures in the front of her business during the weeks leading up to the performance to help advertise.

“It was beautiful, it was gorgeous,” she said. “It’s like enchantment; it makes you forget about all your problems and you just feel like you’re in heaven. So beautiful.”

Accompanying Ms. Zekyrias to the performance on Wednesday was her 91-year-old father. Ms. Zekyrias said her husband passed away three years ago, and it was deeply touching to see such heavenly scenes in Shen Yun.

“You feel peace,” she said. “Because peace and harmony is where you connect with your heart, and your soul, and your mind. It’s all connected.”

“It’s peace, it’s happiness, it’s order,” she said. “When you have connection, order in your life, very strict order, and there’s a lot of order, your life’s complete. When there’s no order, everything’s in disarray.”