Shen Yun Brings Beauty and Hope for a Better China 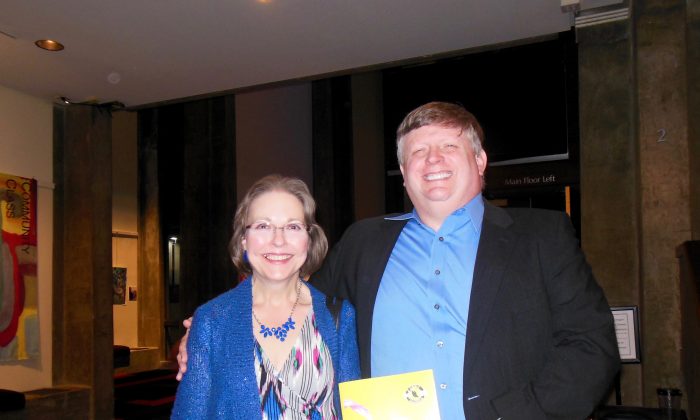 INDIANAPOLIS—Every once in a while you experience such beauty that you cannot help being touched by it. That’s how Regina Frankeny felt after seeing Shen Yun Performing Arts. “Ethereal, almost heavenly, I would say,” was her description at Indianapolis’s Clowes Memorial Hall after the performance.

From the beauty of the dancers and singers, to the digitally animated projections behind them, she felt the whole of it was wonderful.

Her husband, Kevin Frankeny, an advisor with Midcontinent Independent System Operator, agreed, and shared his thoughts on March 8.

“I’m very glad to see there are organizations like Shen Yun that are keeping the tradition and culture alive, and helping bring focus on the issues that some of the Chinese people are facing,” Mr. Frankeny said.

Formed in 2006 in New York, Shen Yun, through music and dance, aims to revitalize a culture of a nation once called the Celestial Empire, because its people believed that gods and man coexisted.

One of the issues facing the Chinese today is human rights abuses at the hands of the communist party, principally, the persecution of people of faith.

“I think it really points out and does a good job of drawing attention to the persecution and the shame that happened in China throughout [history], to take a great culture like they had and then have that almost destroyed,” he said.

In ’60s China underwent the Cultural Revolution when the old ways and beliefs were attacked. Temples were razed, books burned, and people mercilessly humiliated, tortured, or worse.

Mrs. Frankeny felt more sympathy for the Chinese knowing what they have been through.
Yet despite some of the dark themes of a few of Shen Yun’s story-based dances, people often leave the theater with a feeling of hope, as the Frankenys did.

In seeing the spiritual nature of traditional Chinese culture displayed, especially in the lyrics to songs, Mr. Frankeny felt a commonality with his own faith. He hopes China can get back to that.

Mrs. Frankeny, too, felt knowing that from farmer to emperor, what the culture used to entail included more than it is now, which gives “you hope for—this is not all there is—there is more,” she said.

“The message to me was a very hopeful one,” Mr. Frankeny said. “There was a lot of portrayal of difficulties, of persecution, but in the end, a lot of hope and the hope that these troubles will be overcome was, I think, was the final message that I got. Right will ultimately succeed.”

He feels the performance is doing a real service for the Chinese people in helping the rest of the world understand that the China we hear about in the news today doesn’t represent all that China is or was, he said.

“This provided a real look into China that I did not know existed,” he said.

For Mrs. Frankeny, her final thoughts were of the performance’s beauty: “Just to be in the presence of such skill and artistry that were exhibited by the singers and the dancers, I feel privileged to be able to witness it.”