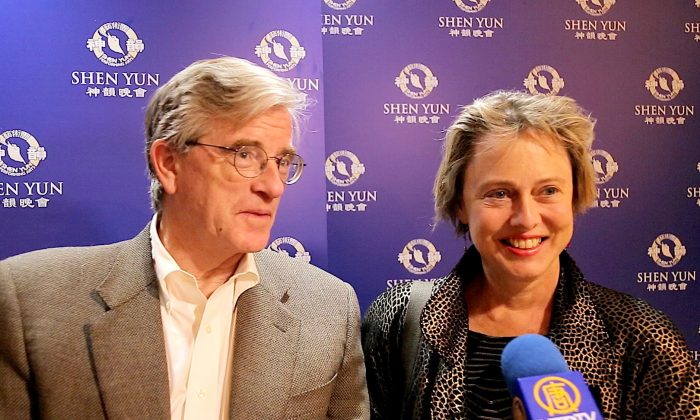 Jim and Martha Alexander enjoyed both the serious purpose and entertaining spectacle of Shen Yun at Lincoln Center on March 13, 2016. (Courtesy of NTD Television)

NEW YORK—Now retired, Jim Alexander, the former CFO of the Enron subsidiary, Enron Global Power and Pipeline, was on the right side of history as he sniffed the problems in Enron‘s course long before the scandal broke. It is likely that Shen Yun, bringing the human rights abuses of China to light for the world, will someday be seen in the same way: on the right side of history.

Each season, Shen Yun Performing Arts, a classical dance and music company, includes a few dances that illuminate the plight in China of Falun Gong, a peaceful meditation discipline whose practitioners align themselves with the ideals of truthfulness, compassion, and tolerance.

Falun Gong has been brutally persecuted for their beliefs since 1999, yet the world has barely bat an eye—perhaps because the story has been so under reported.

Martha Alexander, accompanying her husband to Lincoln Center on March 13 to witness 5,000 years of grand traditional culture as portrayed by Shen Yun, including Falun Gong. She knew little about the persecution of Falun Gong and so felt the inclusion of the dances to raise awareness of the issue made the whole performance worthwhile.

“In China, it is such a problem for the people who are the followers of … Falun Gong that they can’t have freedom of religion, and they have so much trouble leaving the country, and so forth. So I think it’s very important to bring that message home, where it can be heard,” she said.

“I agree, I agree,” said Mr. Alexander, a serious student of religion, having taken a non-ordination degree from Yale Divinity School.

“It’s a reminder of what Mao said, or was supposed to have said: Religion is poison,” Mr. Alexander said, and then explained why.

“Anything which distracts from the monopoly of … values of the [Communist] Party, is something which would be very threatening. It was a reminder to me to the fact that the Party is still very threatened by those who would even want the most estimable, the highest sorts of values imaginable, and how sad a commentary that is,” he said.

Of the 17 dances in the program, some tell of China’s problems, some are taken from its ancient legends or literary classics, but others share the breadth of China by introducing its many peoples through folks dances.

The effort reminded Mrs. Alexander of the work of Igor Moiseyev, who under the Soviet Russian regime salvaged the folk dances of the many people of pre-communist Russia.

“I always like it when people don’t forget the traditions of the country regardless of where that country is—that’s a very positive message—emphasizing the pre-communist value systems and cultures, which hopefully will not be stamped out,” she said.

In addition to the seriousness of Shen Yun’s mission, the two also simply enjoyed themselves.

As a retired graphic designer, Mrs. Alexander admired the visuals. “The costuming, the colors, and the types of fabrics, and the various fabrics that were attached to the dancers’ arms that could create such a feeling of flow,” said Mrs. Alexander. She was speaking in particular of the dance “Fairies of the Sea,” in which delicate maidens create the effect of rolling ocean waves.

“It was incredible,” she said.

And Mr. Alexander mentioned the amazing range of emotions elicited from the erhu, a two-string violin-like instrument. “Astounding really,” he said.