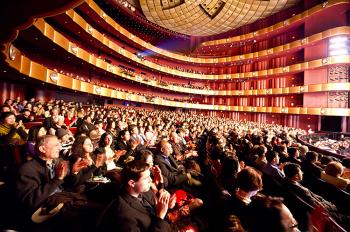 NEW YORK—Tickets were scarce as audience members poured into the Lincoln Center's David H. Koch Theater, on January 15. The night's performance was the second-to-last, before Shen Yun Performing Arts New York Company will leave Lincoln Center to continue on its world tour.

"I think it’s stunning," Mr. Fastook said. "It’s my second year and I think it’s even better than last year. I was just really, really impressed."

"It’s something that I’m never going to miss," he added.

Shen Yun Performing Arts is based in New York and has set out to rekindle China's traditional cultural heritage.

Through the highly expressive art of classical Chinese dance, the performers of Shen Yun wove together a story spanning across China's 5,000 years of civilization. Dances ranged from the elegant Tang Dynasty courts, to tales from classic Chinese novels including "Journey to the West."

"It’s really terrific to see the [Chinese] culture staying around," Mr. Fastook said. "To be in the United States and experience that is really unique."

Mr. Valdes, chairman of an international investment banking company, added, "It’s something you hope is never lost … It’s something we need to support."

Having also seen Shen Yun Performing Arts in New York last year, Mr. Valdes said he was glad to see it perform at the Lincoln Center.

"It’s more intimate here," Mr. Valdes said. "You’re up closer and they just seem to jump right at you. The silks, you just see how they flow, and it looks like the dancers are floating over the stage.

"Beautiful. It really is just a fantastic show," he said.

Shen Yun Performing Arts New York Company will wrap up its two-week run at Lincoln Center on Sunday, Jan. 16, at a 3 p.m. performance, after which they will travel to Schenectady, NY, to perform at Proctors Theatre on Jan. 19., and then continue their tour to perform at The Kennedy Center Opera House in Washington D.C., Jan. 26-30.