Shen Yun Awakens the Soul and Helps It Evolve Toward Heaven 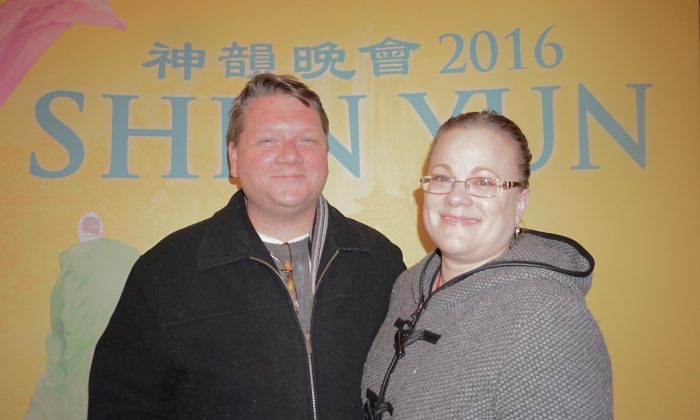 It is the integration of Shen Yun’s theatrical elements, such as dance and use of technology in its animated backdrops, with its respect for the breadth of cultures and for depth of traditional culture going back millennia. Then going beyond our known world, it represents something beyond the human domain and presents deities onstage, the experimental psychologist/mental health counselor explained.

“I thought it was wonderful how art and music and dance and cultures were brought together, East and West, in service of the message, the overall message of harmony, togetherness, working for the common good, working for the beauty of life and living, and what is beyond this plane of living that we exist in currently, you know—the mysteries of what is beyond the known—I thought were represented beautifully,” she said.

Ms. Mihalick and Jason Horn, a graduate student in computer science, have a grasp of Buddhist philosophy that they shared with a reporter at the Peabody Opera House, where Shen Yun had just performed.

“The timing couldn’t be better for humanity to come together and think outside themselves for once, [to] get past technology, get past the barriers that prevent mankind from being more than they could be,” Mr. Horn said on Feb. 13. “And that is one of the biggest messages that I’ve got from this show.”

This depth in Chinese culture is based in Buddhism, Taoism, and Confucianism’s principles, such as truthfulness, compassion, respect for one’s elders, and reverence for the heavens. Shen Yun embodies these principles in stories told through classical Chinese dance, which the company showcases.

Mr. Horn felt the embodiment was impressive. The timing between the dancers, the integration of technology in the backdrop, and the precision between the two were flawless.

In addition to the dance, vocal soloists sing on these philosophical themes.

The tenor, when he sang his pieces, they were very, very moving.
— Jason Horn

“The tenor, when he sang his pieces, they were very, very moving, especially as I was reading the … translation of what he was saying. He was very good, and that was very powerful,” Ms. Mihalick said.

Some audience members cry during the performance and don’t know why. As a psychologist, Ms. Mihalick believes that Shen Yun might open up to feelings, big feelings, that have been suppressed and people aren’t sure what they mean “but they know it means something” and so they will get choked up or have a tear.

Shen Yun Shows Us the Way

Mr. Horn believes Shen Yun will help us snap out of the “fog that we’re in on a daily basis” where “we decided that because we get up every day, we go to work, we go to bed, … we get into a rhythm in a world of destruction and negativity that is evil and found in every culture and on every continent.” And in doing so “we lose touch with what is higher.” Yet this is not the “natural, divine plan.”

“It’s not how things are supposed to be. … Think of it in terms of a prison, and freedom is coming, I hope. And I think that this was reflected in this show,” he said.

“It’ll plant the seed that there is hope,” Mr. Horn said, for he sees Shen Yun as a learning tool to help the soul evolve. He brought up the idea of ascending, such as the soul ascending to something higher, which is a theme in man cultures and something he saw it present in Shen Yun’s stories, told in many different ways. This idea is what sets people free, he said.

Mr. Horn believes that a Creator of supreme consciousness gives an opportunity to many, many, many multiple sentient beings to become ascendant—like the Buddhas and gods that we know on earth—and these “in turn help humanity, each and every one of us become ascendant as well, in our own way and our own time. Each shows a different path,” he said.

In summing up her impressions about the performance, Ms. Mihalick said the messages were “freedom, harmony, compassion, … be who you are, help others, be compassionate, be honest, be authentic.”