Shen Yun, ‘An Explosion of Colour and Movement’ 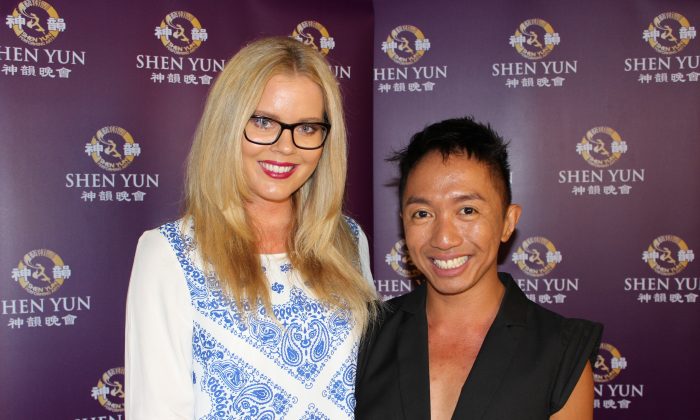 SYDNEY—The opening night of Shen Yun Performing Arts at the Capitol Theatre got rave reviews from the audience, Kate Johnson and Peter Sereno among them.

“I have never been to a show like this before so I feel incredibly cultured and privileged,” she said.

“This is the perfect day out, it was the perfect mix of technology and dance and, I feel entirely liberated walking out, it’s fantastic.”

Ms. Johnston won the Australian Mrs International Pageant Queen in 2014 and is the Founder of Chic Nation, a model and lifestyle blog.

Mr. Sereno is the founder of ‘Dear Pageant Girl’, he also trains beauty queens before they compete overseas.

Mr. Sereno was equally impressed with the high caliber of the performance which he felt Shen Yun was both educational and highly entertaining.

“I think the only word that I could use is overwhelmed. I’m overawed with the colours. I was overwhelmed by the music,” he said. “I was really impressed with the diversity that the Chinese culture has. I think that a lot of people probably aren’t aware of that, so I got a real education tonight, not just education but I was really entertained too.”

Many of Shen Yun’s ethnic and folk dances are from all the diverse cultures in China.

The ethnic dances had such an impact on Ms. Johnston that it has inspired her to consider travelling to China or Mongolia.

Mr. Sereno was quite taken by the costumes saying that they had given him a few ideas to use in his beauty queen business. He however acknowledged that it is the grace and confidence, and the belief in what you are doing that has the greatest impact on the audience.

“So that’s a lesson I can definitely take away from this and pass on,” he said.

Ms. Johnston agreed saying, “It really came back to inner beauty as well as much as there was a lot of gorgeous outfits and technical designs and that sort of things, but because of the inner beauty I really think that’s something you can take away from this as well.”

He said, “Everybody will be entertained, so definitely come and see it. And we’re coming back next year to see it too because it is a different show, so we’re excited about that.”

Colleagues Anthony Michaelopoulos, a marketing executive of YTD and Alison Hay,  executive  assistant were excited to see such a cultural and colourful performance.

Mr. Michaelopoulos found Shen Yun really exciting, something he had never seen before. He said it was a great experience and opened his eyes to God and culture.

“Seeing something so cultural, colourful, bright and things like that is something new and really exciting to see,” he said.

Ms. Hay has lived abroad for the last 15 years and has seen many performances but nothing that compares with Shen Yun.

“The colours, the light, the performers, it’s just amazing, it’s so good,” she said.

She thought it was very poignant and important that the messages portrayed in Shen Yun were brought to Australia.

She was referring to the dance, The Power Of Compassion, which tells how people who are practicing a spiritual practice, Falun Gong, are persecuted in China.

“Australian populous has no idea about their plight, so it’s a really important voice in the dance and the beautiful theatre to bring the message to the Australian people.”

Both Mr. Michaelopoulos and Ms. Hay work in the fashion industry and they were both inspired and amazed at the use of colours in the stunning costumes.

“From the outfit perspective you could definitely get some inspiration from that, definitely the colour matching and all of that, it’s pretty spot on,” Mr. Michaelopoulos said.

Ms. Hay was taken with how the lighting, the costumes and the theme came together. “A beautiful, beautiful medium,” she said.

“It’s amazing! I mean, hat’s off to the production is all I can say.”

Ms. Hay appreciated the spiritual aspect of the performance and felt that they linked into everyone’s psyche in a way that enhances one’s everyday thoughts and dreams.

Tara Turner, a high school student and Ibro Makhmueoy who works in financial banking were equally impressed with the performance saying it was a very powerful and vibrant experience. Ms. Makhmueoy said that Shen Yun’s conveyed a universal message of hope that everyone can connect with.

“Absolutely amazing, the dancers are out of this world,” said Ms. Makhmueoy.

She was very touched by the solo instrumental performance of the erhu.

“I thought that was one of the best things that I have experienced; it took me to another world. I think it is something everyone should experience.”

The website states, “The erhu is one of the most important Chinese instruments, with a history of over 4,000 years. Though it has only two strings, it can convey a wide range of emotions.”

Ms. Turner said, “Shen Yun is really suited for all audiences from young to old, everyone can enjoy it. There’s the colours the vibrancy the energy, it appeals to everyone really and it’s just a really good message for all ages.”

The dances were another aspect that they enjoyed.

“Oh the dancers were amazing—I thought they were so graceful,” Ms. Turner said.