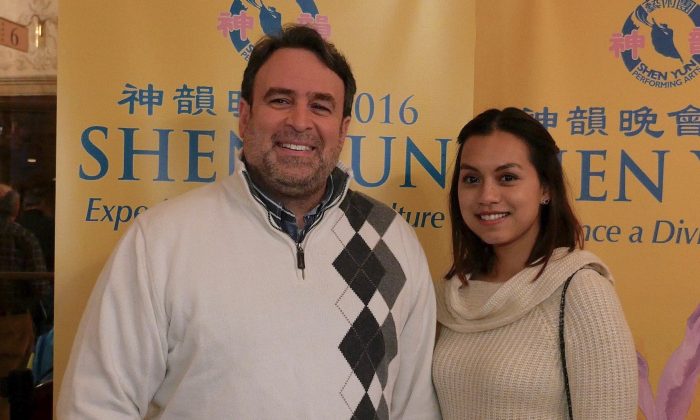 Daniel Alkhal and Khine Zaw after watching Shen Yun Performing Arts at the Academy of Music in Philadelphia on Jan. 9, 2016. (Epoch Times)

PHILADELPHIA—There are some performances in the world that you walk away from feeling enlightened. Shen Yun Performing Arts is one of those.

Founded in 2006 with the mission to revive 5,000 years of Chinese culture, Shen Yun has taken the world by storm. This year the company will perform in over 100 cities around the world.

“I think it’s enlightening. Many of us have not seen anything similar to this even though we are very well-traveled in Asia,” said Daniel Alkhal, a senior policy adviser for the United Nations High Commissioner for Refugees (UNHCR), who watched the performance with his wife at Philadelphia’s Academy of Music on Jan. 9.

“To see that thousands and thousands of years have been encompassed in only one hour so far, its just amazing,” said Daniel Alkhal during the intermission of the performance.

Mr. Alkhal’s wife, Khine Zaw, was equally mesmerized by the performance. “It’s brilliant. The performance is amazing, and we get to see the 5,000 years of Chinese culture, and it’s very emotional,” she said.

The hallmark of Shen Yun’s performances is classical Chinese dance, an art form with a history of thousands of years. Each Shen Yun performance is accompanied by the Shen Yun Orchestra, which is unique in the world in that it uses both Western and classical Chinese instruments, and seamlessly blends the two musical systems.

But it is the deep inner meaning of China’s rich cultural heritage that is being expressed through the dance and music that has the longest lasting impact on the audience.

“I feel enlightened,” said Mr. Alkhal. “It gives you very good spiritual feeling that you didn’t see before and you didn’t feel before.”

Ms. Zaw said, “It’s not just a simple dance and song. It’s about the way they perform with their emotions.”

Both of them showed their appreciation for Shen Yun’s efforts to preserve and showcase China’s culture. “The work that they are doing is just tremendous work,” said Mr. Alkhal.