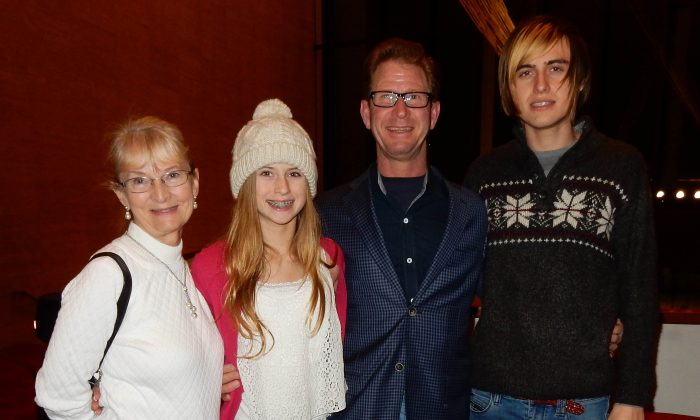 HOUSTON—The traditional Chinese culture depicted by Shen Yun Performing Arts was new to Jeff Kapustka, but he found the themes in the performance universal.

“I think it is amazing … I brought my whole family and we’re enjoying it so much. It’s fascinating. It’s great to learn about the culture as well,” he said during intermission at the performance at Jones Hall for the Performing Arts Jan. 5.

Mr. Kapustka, who is the vice president of the executive recruiting firm CareerSMITH, is also an oil painter and musician, playing the piano, base guitar, and hammer dulcimer.

He said Shen Yun had been “all inspirational” for him and his family.

He particularly enjoyed a baritone solo, the hundreds of colorful hand made costumes, and the way performers seemed to come in and out of Shen Yun’s state-of-the-art animated backdrop.

“The costumes are amazing, [and] the backdrops are great,” he said.

The music by the live orchestra also struck him.

“I love it … The unique sound … unique to China and the culture over the years … to be able to recreate that, it’s very impressive,” he said.

Shen Yun is a classical Chinese dance company based in New York and founded with the mission to revive traditional Chinese culture through the performing arts.

This is Shen Yun’s ninth season and the four companies tour on five continents, performing with a live orchestra that combines both Western and traditional Chinese instruments.

For thousands of years, the Chinese considered their culture to be divinely inspired and emphasized values like loyalty, courage, compassion, and propriety.

Mr. Kapustka said the values in the performance had universal appeal.

“I think there’s a lot in common [with other cultures], that’s why it appeals to everybody around the world,” he said.

“I recommend it highly.”