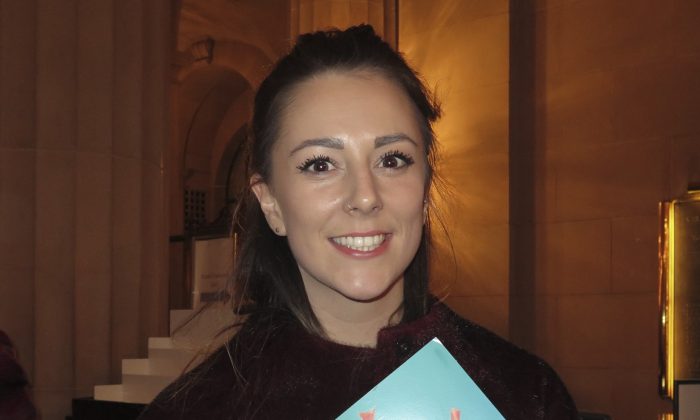 “It was very good, very beautiful and very colorful,” she said in an Irish lilt.

She saw the performance staged at the War Memorial Opera House on January 8, founded in 2006 to revive 5,000 years of divinely inspired Chinese culture.

It is a heritage that has been repressed and largely destroyed in China after the Chinese Communist Party took power there some 65 years ago.

Pink handkerchiefs spin and twirl as young dancers joyfully take the stage announcing the arrival of Spring after the end of a chilly winter, the program book explains.

“It was really pretty to watch,” Ms. Murphy said. “Their dresses looked like cherry blossoms, it was amazing.

“They were very vibrant. It was the color of the costumes and the way they used the costumes in the dance. Maybe the way it flowed,” she said, adding that the dance, itself, was “really impressive.”

“Every costume in a Shen Yun performance is presented with brilliant colors, displaying a splendid spectacle—from the Tang Dynasty’s “Raiment of Rainbows and Feathers” to imperial dragon robes, phoenix coronets, and cloud capes; from the civil official’s headdress and robes to the warrior’s helmet and armor; and from the traditional rightward cross-collared Han clothing to the ethnic attire of the Manchurian, Tibetan, Dai, Mongol, and Uyghur ethnic groups,” the company website says.

The background was amazing.
— Ms. Murphy of Ireland
Ms. Murphy was also amazed by the way the animated backdrops interacted with the performance at hand.

According to the website; “With state-of-the-art graphics technology, Shen Yun’s digital-backdrop team creates vividly animated settings, extending the stage and transporting the audience to a world where heaven and earth are one.”

“The background was amazing, the way they made the characters disappear into the background. The dancing was very, very impressive.”

She said she would tell her friends to definitely see Shen Yun perform.