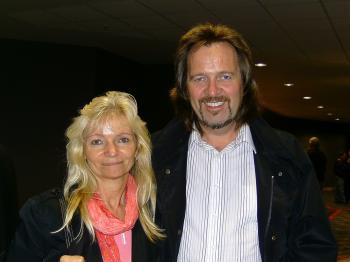 ADELAIDE, Australia—The Adelaide Entertainment Centre staged the Shen Yun Performing Arts for the final time this year on Friday, May 7.

Ulli Nitschke, principle and design director for a leading architectural firm, and his wife experienced the New York based Shen Yun after seeing a leaflet in a local shopping mall. Mr. Nitschke thought it was a good way to introduce China to his wife so he bought them tickets. He just stepped off a plane from Perth to come to the Entertainment Centre tonight.

Continuing, he commented positively on the costumes, “It was a lot of tradition, … my wife is a dressmaker–bridal and she appreciated it.”

She continued saying she loved all the different and beautiful costumes with hand beading and jewelry, she particularly loved In a Miao Village, representing one of China’s oldest ethnic group which is famous for their elaborate head dresses and ornate silver jewelry. Mrs. Nitschke added, “I loved the dresses so colorful and all the shiny bits on it and very soft and the dancing is nice in it.”

Shen Yun uses a state-of-the art digital backdrop bringing breathtaking scenes of Chinese landscapes and heavenly realms to life. The backdrop interacts with the performers on stage who appear to come and go to the heavens and appear on earth.

As a design expert, Mr. Nitschke appreciated the effect. He said, “I liked basically how they actually appeared to the visual, like from the three dimensional stage then dissolving with the clouds and then basically how it all rose and how they used the human body to make it grow up and down and the moves are very very elegant.”

Shen Yun brings China’s thousands of years of culture to life through music and dance, it stages folkloric dances, ancient legends and modern stories. Mr. Nitschke appreciated “the different phases … the history and the different aspects from tenors down to drums, down to different dance performances that I have not seen before, even the regions Tibet—I liked it very much.

“The performance is basically the excellence that I have seen it was brilliant, absolutely brilliant. Particularly the one with the heavenly … I forgot what it was called, but the heavenly something [Heavenly Maidens] was striking.”

Mr. Nitschke was saddened that the traditional culture was suppressed in China through years of communist rule and inspired that Shen Yun was reviving the millennia of lost culture. He was “surprised that they are not showing it [Shen Yun] in China because it is just beautiful dance, why wouldn’t they show it? It is good that so many Chinese also live now all around the world and that they get back to the original roots.”

Shen Yun stages ethnic dances, Mr. Nitschke said, “what touches my heart, is the diversity of different regions, and everything touched me—the way that it was performed.

“I like Shen Yun very very much … it is more authentic. I also like the promise it gives to people that it is not a perfect world but it offers hope,” he added saying “I wish more people could see it.”

Mr. Nitschke is passionate about design and was a student of architecture in Germany for many years and has worked for some of Europe’s leading architectural and design companies before coming to Australia and now runs his own business. His designs are seen all over Australia as well as the world.

With reporting by Jade Liu and NTDTV.

Shen Yun Performing Arts New York Company will be performing in Sydney from May 9 to May 19.