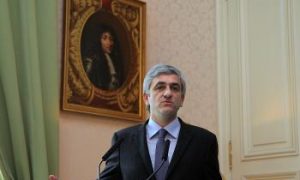 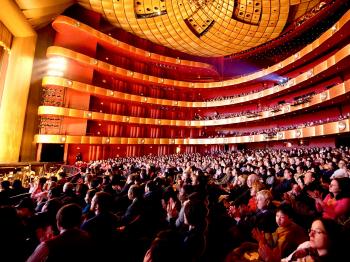 By Joshua Philipp
Print
NEW YORK—The theater was full, and some audience members had a difficult time finding tickets for what was the second-to-last performance of Shen Yun Performing Arts at the Lincoln Center's David H. Koch Theater, before the company continues its world tour.

The January 15 performance was well-received by the audience, who gave a standing ovation. "I’m fortunate to be here tonight—fortunate, privileged," said Mr. Parker, who works for the United Nations.

"I hope that I have the opportunity to attend many more of these," he added.

Based in New York, Shen Yun Performing Arts brings together award-winning Chinese dancers, musicians, and singers who have set out to rekindle China's classical cultural heritage.

Through classical Chinese dance and Bel Canto operatic singing, the performance paints an elegant portrait of the culture and values that guided China's 5,000 years of civilization.

Mr. Parker said he particularly enjoyed the use of the backdrop, which includes high-tech digital animation and life-like scenery. "I find it absolutely amazing, absolutely amazing," he said. "It’s the first time that I’ve actually seen the technique used, and it’s stunning, stunning—beautiful."

"It’s like being in the real world, and then being transported into [another] world," he said.

The performances in Shen Yun range from elegant and playful dances of China's various dynasties and ethnic groups, to stories and legends throughout the country's history.

Other theatergoers on Saturday night were equally enthusiastic about Shen Yun.

"I thought it was really beautiful. The dances and the costumes were really elaborate and colorful," said Jonaki Singh, an English student.

"I think it was a great way to introduce the different aspects of Chinese culture," she added.

The perception was shared by Yvonne Garcia, a property manager, who said, "It portrays a lot of the Chinese culture that people normally don’t get to see.

"If anybody can get out to see it, it’s very, very wonderful," she said, expressing what she would tell others about Shen Yun.