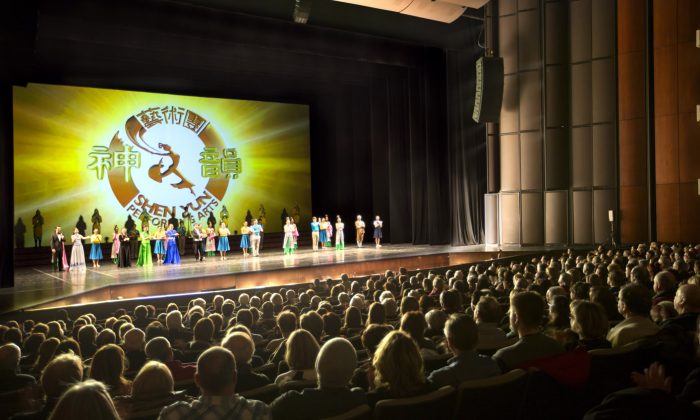 So it was no surprise when he had rave reviews for Shen Yun Performing Arts, a New York-based classical Chinese dance and music company that uses state-of-the-art technology in its performances in the form of digitally animated backdrops.

Mr. Fecteau brought his wife Nancy Fortier to the Shen Yun performance at Grand Théâtre de Québec for her birthday on Jan. 14.

“It’s a very wonderful show,” said Mr. Fecteau. “Full of colour, and I like the music very much, the dance, and the synchronicity of it all.”

“It’s amazing,” added Ms. Fortier, pleased with her birthday present. “It’s like a beautiful ball of energy that circulates on the stage and transmitted to us.”

Since its founding in 2006 Shen Yun has been on a mission to revive 5,000 years of divinely inspired Chinese culture though classical art forms. Featuring story-based classical Chinese dance and ethnic or folk dance in combination with digital backdrops and an orchestra that blends eastern and western instruments together, Shen Yun has made a name for itself at top venues around the world.

Mr. Fecteau loved Shen Yun’s unique orchestra—the first in the world to incorporate ancient Chinese instruments such as the two-stringed erhu and pipa, or Chinese lute.

“The music is very wonderful,” said Mr. Fecteau, a former student of the Quebec Music Conservatory and the prestigious Berklee College of Music in Boston.

“You have not only classical instruments, but also Chinese instruments. And that gives us a colour to the music. It’s very, very interesting, and it goes very well with the show.”

Mr. Fecteau’s company specializes in original music composition, orchestration, and production, including sound editing and voiceover. It has been involved in a large variety of projects over the years, from TV publicity and live performances to Internet e-Learning courses and publicity in general. Notably, Mr. Fecteau has collaborated with the David Copperfield team and other renowned companies in Quebec and Europe.

“I found it extraordinary in that gives us another image of China, which is not necessarily the one [Beijing] wants us to see,” she said.

According to the Shen Yun website traditional Chinese culture and art forms were systematically destroyed by the regime during the Cultural Revolution and decades of suppression since.

The values from the ancient culture—upheld by principles from Buddhism, Daoism, and Confuciansm over many eras and dynasties—were a beautiful part of the performance, said Ms. Fortier.

“The message is extraordinary,” she said. “A message of love and peace—everything is smooth, everything is in harmony.”

“It’s a message of hope, a message of love, also,” added Mr. Fecteau “[There’s] a lot of happiness around this show.”

Ms. Fortier summed up the experience: “Everything is perfect,” she said. “Absolutely wonderful.”

With reporting by Deping Xie and Justina Wheale

New York-based Shen Yun Performing Arts has four touring companies that perform around the world. With its performance in Quebec now finished, Shen Yun’s International Company will continue on to Mississauga and Toronto. For more information, visit ShenYunPerformingArts.org