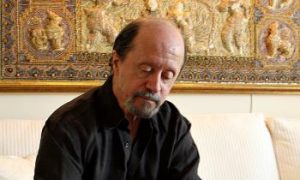 Shen Yun a ‘Taste of Chinese Tradition and Culture’

Mr. Nandwani's partner Anna-Brith Lim, also a doctor, had bought the tickets, and they had travelled down to London from Derbyshire to see the show.

“I’ve enjoyed it very much, especially the costumes are fantastic, and it’s lovely to see dance and music. It’s something that we don’t get to see here very often, so it’s lovely, really enjoying it,” said Ms. Lim during the interval.

The couple enjoyed learning about Chinese history and the many ethnic folk dances from the different regions of China.

"I don’t know much about Chinese history, so that was interesting, and also the way geographically [they've] given some information about where the dances came from, which regions, that’s very interesting,” Ms. Lim said.

Mr. Nandwani particularly enjoyed the dance Herding on the Grasslands, in which male dancers mimic the movements of Mongolian horseriders. "When they are simulating being on horses, I thought it was very clever, very effective. I think the choreography is fantastic,” he said.

The Shen Yun Performing Arts Orchestra that accompanies the performance is a fusion of Western and Eastern classical instruments, creating a unique sound.

With its colourful costumes and easy-to-follow stories, the couple thought their daughter would also have enjoyed the show.

"Our daughter does a lot of dance. She’s 13 and she would have loved it," Mr. Nandwani said.

The couple said that they would recommend the show to their friends, summing up the performance as "colourful" and a "taste of Chinese tradition and culture."