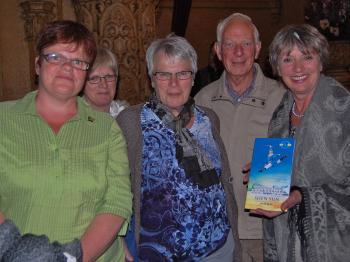 MELBOURNE—Aldonna Martin and Brian Roache brought their three relatives from the Black Forrest in Germany to see the Shen Yun Performing Arts International Company at the Regent Theatre, on Wednesday, March 2, as a special treat for their last evening in Australia.

The Regent Theatre, also affectionately known as the 'People's Palace,' stands in the lively hub of the city. Originally, this opulent, Spanish-gothic hall was a picture theatre. But over the last 80 years, it has been used to house many world class productions and music events, now known as the 'Cultural Capital of Melbourne.'

The New York-based International Company, on its Australian leg of its 2011 World Tour is one of three touring the world simultaneously. The others, Touring Company and New York Company, has just finished shows in Frankfurt, Germany and is now in Austria, while the latter is currently performing in Indianapolis, USA.

Ms. Martin, a retired tax accountant, wanted to treat her family “to the best show,” she said.

From Germany were Adelheid Boehmann, Marta Fleig, and Anita Shirling who joined their hosts in applauding the beauty and quality of the Shen Yun performance.

Retired engineer Mr. Roache added, “I was so pleased with it. They were just magnificent performers. So well-disciplined, the dancing was magnificent. And they were so fit and active … You just couldn’t imagine how they could become so agile.”

Adelheid Boehmann spoke just a little English but clearly said, “Fantastic. It’s very fantastic,” and the smiles on the faces and the excited chatter of the others, didn’t need words.

Ms. Martin had studied ballet as a child and so was particularly interested in the dancing. She felt the technique was “just sensational, absolutely perfect. Perfect … I think the costumes were outstanding.”

The ladies particularly loved “Plum Blossoms” and had been talking with each other about how this dance, depicting how despite the harsh winter, the beauty of the blossoms are accentuated in the snow. Ms. Shirling said through her interpreter, Ms. Martin, the stunning dance was “absolutely gorgeous.”

Every performance delighted the group, each one adding a comment.

Ms. Martin said, “And even the extended sleeves, and the way they draped them and flung them and so forth was absolutely … and so fluid, their movements were so fluid.”

They shared that Shen Yun was more than just a most beautiful performance; it was a message of virtue and moral values.

“The philosophy, the values, the messages, the history, the whole lot was just stunning,” Ms. Martin said.

She said a friend had received a Shen Yun pamphlet and told them about the performance.

They all agreed how lucky they were to see Shen Yun and would encourage everyone to go and see it.

They said they would contact all their friends in Australia and Europe and tell them to check out the website and find the nearest performance to them so they too could share in the amazing performance.

Mr. Roache added, “I think [Shen Yun] really exceeded expectations. You wouldn’t want to miss this show,” while Ms. Martin said emphatically, “You can’t miss it. You must come and see it. You mustn’t miss it, you must see it!