Shen Yun, a Reason to Celebrate 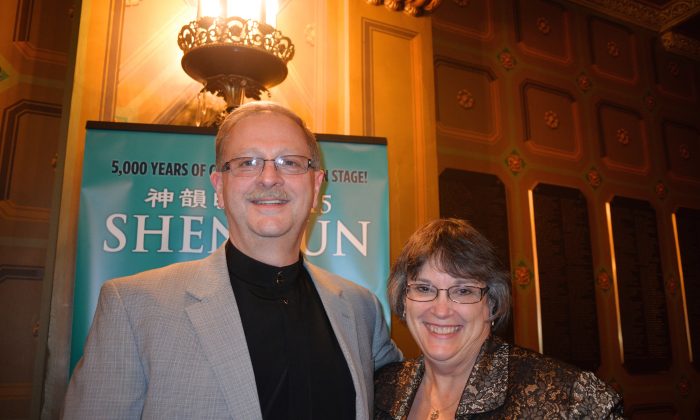 Randy and Victoria Sellman celebrating their anniversary with an evening of Shen Yun. (Helen Peng/Epoch Times)

The traditional Chinese music and dance company gave its second of two performances in Columbus.

“We were looking for something to celebrate our anniversary and we saw it on television, and the beauty just captured us,” said Randy Sellman, who works in sales and building products.

“We thought it was absolutely graceful, beautiful. One of the most beautiful things I’ve ever seen. We loved it,” he continued.

Victoria Sellman added her thoughts, saying, “We have a new appreciation for the history and culture of China, and we loved it.”

He was touched by the diversity of program, which uses classical Chinese dance to depict legends and myths, as well as stories from Chinese history.

“And the variety: to have soloists, the music, the orchestra—was excellent. We were very, very pleased,” he said.

Along with the live orchestra, Shen Yun travels with award-winning vocalists, who, although singing in Chinese, perform with the Italian bel canto technique, a difficult technique which opera singers use.

“There were times, especially with the last vocalist, with her voice just resonating so loudly in the whole theater, it was magical,” said web designer Autumn Ryan, who was also in the audience. “I was amazed,” she said.

The songs’ lyrics are projected in Chinese and English behind the singers, but irrespective of the words, Ms. Ryan felt she could feel the spiritual meanings coming through the soprano’s voice—”how those words felt.”

Joining together in 2006, the artists who founded Shen Yun shared a common purpose. They wanted to revive 5,000 years of Chinese civilization, a culture based on the belief that the divine transmitted a rich culture to the people of the earth.

Ms. Ryan felt that spirituality and culture “go hand in hand, and it is not something that should be thrown away or forgotten about.”

She had wanted to see Shen Yun for years, and this year she received the ticket as a gift—for someone else’s birthday!

Celebrating his own birthday on Thursday evening was engineer Todd Reffey and his wife, Venus, a dental assistant.

Mr. Reffey had also wanted to the see the performance for years.

“It stirs your inner soul, it amazes you,” Mr. Reffey said. “We have wanted to go—for what? Three years?” He asked, turning to his wife.

“It’s very spiritual. It just kind of calms you and excites all at the same time,” he said.

Mrs. Reffey called the performance mesmerizing and loved the music and the colors.

“Very, very enjoyable,” Mr. Reffey said. “It seemed that it was built on a good part of the human nature: the compassion, truth, tolerance.”

The program says, “Values such as compassion and loyalty, kindness and bravery lie at the heart of traditional Chinese culture.”

“We all have that within us, in a sense, but we all want more of that, right?” he asked.