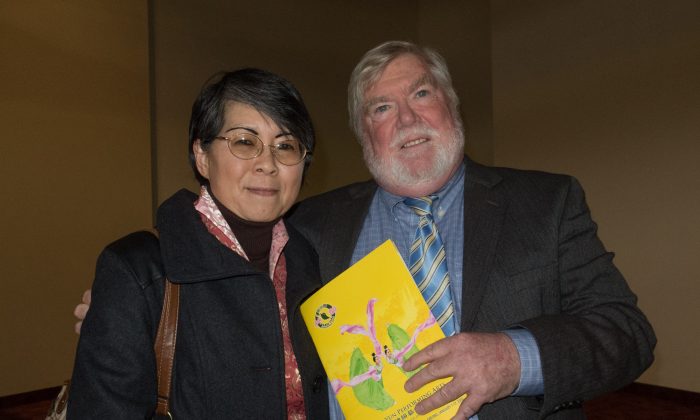 “It was terrific,” he said. “It was a once-in-a-lifetime experience. We’ve been looking forward to seeing it for months.”

Mr. Hurley saw the performance with his wife at the William Saroyan Theatre in Fresno, California, on Jan. 17. New York-based Shen Yun aims to revive 5,000 years of Chinese culture for audiences around the world.

“It’s wonderful to appreciate an ancient art form in music and dance,” said Mr. Hurley. “We are very impressed by the music, the choreography, and obviously, the costumes.”

“We take the opportunity as often as we can to see things that reflect Chinese culture and art,” said Mr. Hurley. “We also appreciate its deep cultural heritage, art, and language. So this is a real treat for us, to be able to witness it here in our homeland in person.”

Mr. Hurley enjoyed seeing the dances that tell stories from ancient and modern China. For his wife, who is from Taiwan, dance pieces such as “The Lady of the Moon” and “Monkey King and the Dragon Palace” brought back her memories of hearing those stories as a child.

“I’m speechless. I’m really touched by it, just looking at the beauty,” she said. “I am so proud of them. They are wonderful. It is just such a beautiful show.”

Three values that especially resonated with her were truthfulness, compassion, and tolerance. These are the guiding principles of Falun Dafa, a traditional Chinese meditation practice that is portrayed in a few of the vignettes.

These principles are “what we believe in and what we live by,” she said. “That’s what we teach our kids.”

Mr. Hurley was touched by every part of Shen Yun, but especially by its sincerity.

“The overall sincerity of the show in portraying this 5,000-year art form was very touching, was very moving,” he said. “The performers and the presenters were so genuine about sharing the message of joy, hope, and creativity in this program.”

According to Shen Yun’s website, traditional Chinese culture is believed to be divinely inspired. Values such as wisdom and respect for heaven are at the heart of this ancient culture, and Shen Yun’s goal is to portray them for today’s audiences.

Mr. Hurley saw his own spiritual beliefs reflected in Shen Yun’s “messages of hope and renewal, of good triumphing over evil, of people being able to share in the divinity of a higher power,” he said.

“I appreciated seeing it expressed genuinely and a different way on stage today,” he said. “I think the overall message of hope for humanity, for renewal, for resurrection of our spirit and our soul, was very nice.”